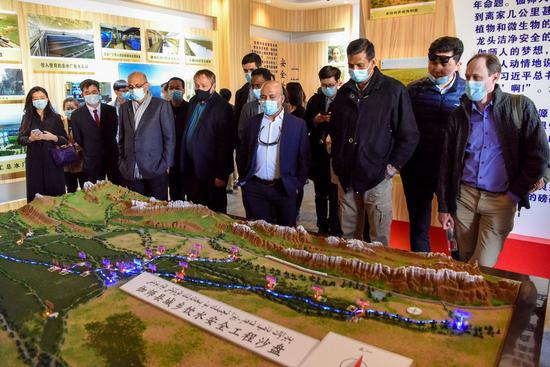 Foreign diplomats visit a rural water supply station in Payzawat County, northwest China's Xinjiang Uygur Autonomous Region, March 31, 2021. From March 30 to April 2, a delegation comprising Vladimir Norov, secretary-general of the Shanghai Cooperation Organization (SCO), and more than 30 diplomats from some 21 countries visited Xinjiang. They talked with locals from various sectors of society, visited local schools and enterprises, and debunked rumors about Xinjiang, a region whose image is frequently distorted by some Western politicians, organizations and media. (Xinhua/Ding Lei)

Savoring a piece of naan sprinkled with spices and chatting with a naan master at the International Grand Bazaar in Urumqi, Vladimir Norov was amazed at how this bread-like staple food has boosted the development of northwest China's Xinjiang Uygur Autonomous Region.

"The naan has a perfect integration of tradition and modernity," said Norov, secretary-general of the Shanghai Cooperation Organization (SCO).

He said what impressed him most was the industrial chain driven by naan, a daily food for the people in Xinjiang, which is also gaining popularity in other parts of China. The naan making involves agricultural production, processing, logistics, cultural creativity, and the tourism industry, thus providing various positions for job seekers.

Norov is not the only one impressed by the social and economic development in Xinjiang in recent years.

From March 30 to April 2, a delegation comprising Norov and more than 30 diplomats from some 21 countries visited Xinjiang.

They talked with locals from various sectors of society, visited local schools and enterprises, and debunked rumors about Xinjiang, a region whose image is frequently distorted by some Western politicians, organizations and media.

Mohammad Keshavarz-Zadeh, the Iranian ambassador to China, visited mosques in the regional capital Urumqi and Kashgar. He was amazed by the conditions there.

Responding to rumors fabricated by some Western media that Xinjiang "restricts freedom of religious belief," the ambassador said that, during a visit to the Baida Mosque located in Urumqi, normal Islamic religious activities in mosques took place in line with the Muslim people's will.

"As a Muslim, I prayed in the mosque. I saw people are free to practice their religious activities." He said that the mosques are spacious and bright, the carpets are soft and clean, and there are tables and chairs for the convenience of the elderly and the disabled.

He also noticed that the Chinese government's efforts in fighting terrorism are genuine and bearing fruit.

Xinjiang has "completely reversed the past, which was marked by frequent violent terrorist activities. There have been no terrorist incidents across the region over the past more than four years," Shohrat Zakir, chairman of the regional government, told the delegation at a briefing held on Friday in Urumqi.

Mohammad Keshavarz-Zadeh's view was echoed by Mahendra Bahadur Pandey, the Nepalese ambassador to China, during their visit to an exhibition themed around the arduous fight against terrorism and extremism in Xinjiang.

"I appreciate that the Chinese government and people not only substantially control terrorism but they have given new ways of life, including vocational training and education. It means people in Xinjiang are not suppressed, and they have been given opportunities to move forward toward peace and development," said Pandey.

Some foreign diplomats voiced support and appreciation for policies that helped maintain Xinjiang's stability and development.

Efforts have gone into developing Xinjiang, and many people's livelihoods have significantly improved, noted Ivan Zhelokhovtsev, Charge d'Affaires ad Interim of the Russian Embassy in China.

He said that some Western news reports would not influence their views on Xinjiang-related issues. During his stay in the region, he did not find the issues that the news described.

"Upholding a people-centered development policy and taking people's longing for a better life as its goal, Xinjiang has made unprecedented achievements in promoting economic and social development and improving people's livelihoods," said Shohrat Zakir.

Barataji Abdulla, a 33-year-old resident from Nazarbagh Town in Kashgar, was once a taxi driver. He was deeply influenced by extremism, even refusing to provide services for non-Muslim people.

In order to get life back on track, his family members persuaded him to join a local vocational education and training center in May 2018, where he learned laws and vocational skills.

After graduating in May of the following year, he became a pump truck driver with a monthly income of over 6,000 yuan (about 914.6 U.S. dollars) and now lives a stable life.

Sobah Rasheed, minister counsellor of the Embassy of Maldives in China, said he was glad to see that Abdulla got rid of extreme thoughts and became thoughtful and far-sighted.

In a production workshop of a textile enterprise in Aksu, modern machines are running at full capacity.

Akram Zeynalli, the ambassador of Azerbaijan to China, said that the machines here are highly advanced. He said he did not see anything negative in the working area or the staff living quarters. "I feel very good visiting here."

Sanmugan Subramaniam, minister of the Embassy of Malaysia in China, said that there are many textile enterprises here that provide a large number of positions for local job seekers, which is of great significance for economic development.

"I hope to have more opportunities to visit Xinjiang in the future and feel its progress and development," said Sanmugan Subramaniam.

"I am deeply impressed by the rapid development of Xinjiang. People of all ethnic groups live and work in peace and contentment and enjoy equal rights," said Vladimir Norov.

He said that the SCO is committed to maintaining security and stability and promoting the prosperity and development of its member states. Many Xinjiang developments and governance experiences are worth learning from, he added.