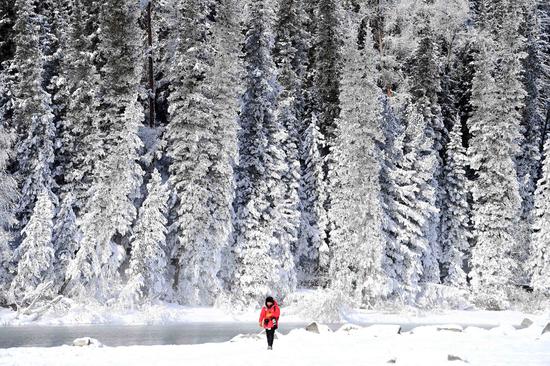 Special: This is Xinjiang

The latest allegations on Xinjiang by Mike Pompeo of the United States are "nothing but a pack of lies," said officials of northwest China's Xinjiang Uygur Autonomous Region.

The remarks by Xinjiang officials were made at a press conference on Wednesday night in response to Pompeo's false allegation of "crimes against humanity" in Xinjiang.

"Pompeo's accusations against Xinjiang are totally sinister rumors. In fact, the United States is the country that practices 'genocide', said Elijian Anayit, spokesperson for the information office of the Xinjiang regional government.

As is known to the world, ethnic minorities in the United States have long been suffering from bullying, exclusion and wide, systemic discrimination in economic, cultural, social and other aspects, the official said. "From killing American Indians to slave trade, American history has been a history tainted with blood and tears of ethnic minorities."

The death of African-American George Floyd and the subsequent mass protests once again exposed the country's protracted and systemic serious racial discrimination, the spokesperson added.

By denigrating Xinjiang's religious affairs, Pompeo attempted to maliciously sow discord between different ethnic groups in the region, he said.

Freedom of religious belief of all ethnic groups is well respected and protected. In Xinjiang, normal religious activities such as recitation, praying, teaching of the Koran and fasting, conducted by Muslims at home or mosques, are all believers' voluntary activities and protected by law, according to the official.

Xu Guixiang, another senior publicity official of the region, said at the press conference that Xinjiang has made steady progress in human rights and that people of all ethnic groups in the region have a growing sense of fulfillment, happiness and security.

No violent terrorist cases have ever occurred over the past four years and cases of criminal and public security have fallen dramatically in Xinjiang, Xu said. From 2014 to 2019, the per capita disposable income of Xinjiang residents grew by 9.1 percent on average, he added.

Under the leadership of the Communist Party of China, Xinjiang has realized unprecedented achievements in economic and social development, improving people's livelihoods and human rights protection, Xu said.

The good situation of social stability, economic prosperity and people living and working in peace and contentment, which is obvious to the whole world, will by no means be obliterated by the lies and smears made by buffoons like Pompeo, the official added.