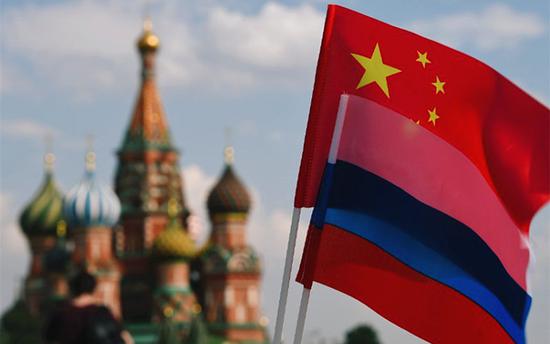 The national flags of China and Russia are seen on Red Square, Moscow.

Russian Foreign Minister Sergei Lavrov said Monday that Russia and China have built a trusting relationship, and together the countries have the ability to counter foreign threats.

"We really have a very close strategic relationship with the People's Republic of China," the minister said during his annual press conference held in an online format.

"We can talk endlessly about Russian-Chinese cooperation that embraces a very wide range of spheres, almost all spheres of human activity, and the activities of states," he added, in response to a question from Xinhua.

Speaking of cooperation on international platforms, Lavrov outlined the collaboration of both countries within the frameworks of the Shanghai Cooperation Organization, the BRICS, and the Eurasian Economic Union (EAEU), pointing to the ongoing process of greater alignment between the EAEU and the Belt and Road Initiative.

Commenting on the recent extension of the Russia-China agreement on mutual notification for launches of ballistic missiles and carrier rockets, Lavrov emphasized that with this, both countries are contributing to ensuring stability in the Asia-Pacific region.

"I believe that this reflects the trusting, forward-looking nature of Russian-Chinese relations and our mutual focus on ensuring stability in the Asia-Pacific region, where some of our other colleagues, in particular the United States, are trying to escalate tensions, both by conducting military activities with an open bias against China and a focus on isolating Russia," the minister said.

Lavrov further pointed to the importance of the Russia-China Year of Scientific and Technological Innovation.

"This is probably a topic of the greatest relevance today, which is designed to give impetus, new qualities to our trade and economic cooperation," he explained.

"In contrast to many countries, we have managed to prevent a large decline in trade turnover amid the pandemic. It is showing steady development," he added.

The minister emphasized that since the outbreak of the coronavirus pandemic, both countries have cooperated closely on a range of matters including the return of Russian citizens, provision of mutual humanitarian assistance, and cooperation on vaccine development.