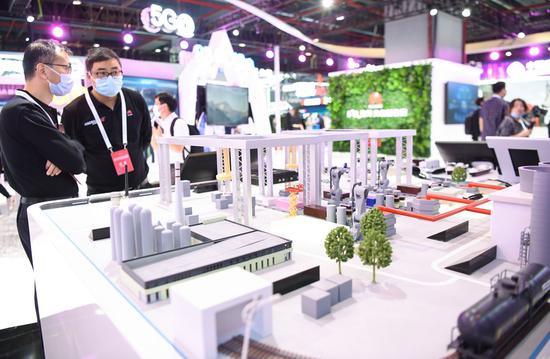 Photo taken on Nov. 26, 2020 shows a model of a 5G-supported smart factory at a 5G-themed exhibition held during the World 5G Convention in Guangzhou, south China's Guangdong Province. (Xinhua/Deng Hua)

Xi made the remarks while presiding over a group study session of the Political Bureau of the CPC Central Committee held on Monday.

IPR protection relates to the modernization of China's governance system and capacity, high-quality development, people's happiness, the overall situation of the country's opening up to the outside world, and national security, Xi said.

To build a modern socialist country in an all-round way, it is necessary to proceed from the height of national strategy and the requirements of entering a new stage of development, to strengthen IPR protection comprehensively, promote the building of a modernized economy, stimulate the innovation vitality of the whole society, and promote the construction of a new development pattern, said Xi.

In his speech delivered at the group study, Xi pointed out that innovation is the primary driving force behind development, and protecting IPR is equal to protecting innovation.

Xi stressed that China's IPR protection work began shortly after the founding of New China. Since the 18th CPC National Congress, the CPC Central Committee has put IPR protection in a more prominent position. It has promoted a series of reforms, carried out a series of major policies, actions and plans, implemented a strict IPR protection system, and resolutely punished the infringements of legitimate rights and interests, especially IPR infringements.

China has made historic achievements in IPR protection, and the awareness of the entire society to respect and protect IPR has significantly improved, Xi said.

Xi pointed out that the top-level design for IPR protection should improve. China will create a national plan for IPR protection and application for the 14th Five-Year Plan period from 2021 to 2025, specifying goals, tasks, measures and a blueprint for implementation. The plan should strictly protect IPR, ensure public interests, and create incentives for innovation.

Xi stressed China should make IPR protection more law-based through strictly implementing relevant provisions of the Civil Code, speeding up the improvement of relevant laws and regulations, promoting the amendments to related laws, and striving for consistency among different laws.

China should improve legislation in the fields of geographical indications and trade secrets, strengthen civil judicial protection, and formulate litigation rules that conform to the laws of IPR-related cases, Xi said.

He added China should improve the quality and efficiency of IPR-related trials, improve criminal laws and judicial interpretations and intensify efforts to crack down on IPR-related crimes.

Xi called for a well-rounded IPR public service system so that innovation achievements can better benefit the people. The construction of IPR-related information and intelligent infrastructures should also be improved, Xi added.

Publicity and education on IPR protection should be strengthened, Xi said, adding that the entire society should be more aware of respecting and protecting IPR.

He also called for deepening the reform and innovation in IPR trials, improving the IPR litigation system, and promptly implementing the punitive compensation system. Efforts should also be made to improve the IPR evaluation and ownership system, and formulate regulations to prevent IPR abuse.

He urged deepening the intellectual property cooperation with the countries and regions along the Belt and Road and promoting knowledge sharing.

Work should be done to create an efficient international mechanism for the early warning of and emergency response to IPR risks, and establish a risk prevention and control system for foreign-related IPR issues.

Xi pointed out that Party committees and governments at all levels should make concrete efforts to improve the coordination mechanism of IPR work, attach importance to IPR talent training, and resolutely overcome local protectionism.