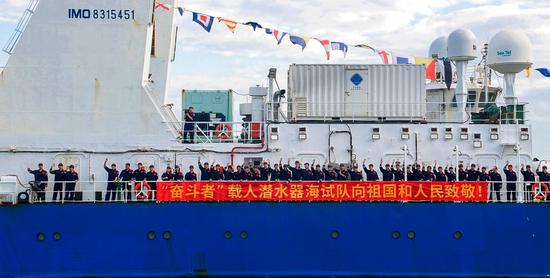 The crew of the scientific research ship Tansuo-1, celebrates on Saturday after China's new deep-sea manned submersible Fendouzhe, or Striver, completed its ocean expedition and returned to a port in Sanya, Hainan province. The submersible set a national record by diving to a depth of 10,909 meters in the Mariana Trench during the expedition. (Photo/China Daily)

Breakthroughs in science that made dive possible can also benefit society

President Xi Jinping called on Saturday for scientists and engineers working on deep-sea equipment and exploration to keep contributing to China's rise as a strong maritime country, as well as humanity's understanding, conservation and development of the oceans.

Xi, who is also general secretary of the Communist Party of China Central Committee and chairman of the Central Military Commission, made the remarks in his congratulatory letter on the successful completion of the 10,000-meter sea trials of China's new manned submersible Fendouzhe and its return to port in Sanya, Hainan province.

The vehicle, known as Striver in English, set a national diving record of 10,909 meters on Nov 10 in the Challenger Deep, the deepest known point of Earth's oceans, located at the southern end of the Mariana Trench in the western Pacific Ocean.

The feat shows that China now has the ability to conduct scientific exploration and research in the deepest parts of the ocean, which reflects the country's overall prowess in cutting-edge maritime technologies, Xi said.

Xi called for all scientists involved in maritime equipment and exploration to keep scaling new heights and accelerate the nation's progress in becoming a maritime power, thus contributing more to the great rejuvenation of the Chinese nation.

Given that the average depth of the ocean is about 3,600 to 4,000 meters, with Fendouzhe, experts said China has acquired "full ocean depth capability", meaning it can carry out routine manned expeditions at any depth of any ocean.

This opens a new chapter in China's deep-sea exploration, as it can now venture into unchartered areas under the sea where the water pressure would typically crush any visitors.

This may lead to new discoveries of marine organisms and ecosystems in the most inhospitable places on Earth, and deepen humanity's understanding of the formation of tectonic plates, along with marine biology, chemistry and conservation.

It can also unlock access to a wealth of natural resources, such as gold, cobalt and oil buried beneath the ocean floor, as well as the secrets behind the origin of life and how it can thrive under extreme conditions, they said.

The breakthroughs in basic science and engineering that made the dive possible can also benefit society, such as by improving telecommunication and electronics, developing stronger building materials and longer-lasting batteries, and creating new manufacturing techniques for major equipment and infrastructure.

Of all the natural frontiers humanity has conquered, the deep sea remains the most elusive and exclusive. Thousands of people have climbed Mount Qomolangma, known in the West as Mount Everest, and around 560 people have gone into space, but fewer than 20 people have dived to the Challenger Deep.

Extreme water pressure is one of the main obstacles during deep-sea exploration. At the Challenger Deep, the water pressure can reach around 11,250 metric tons per square meter, according to the National Oceanic and Atmospheric Administration of the United States.

The salty seawater is another major challenge as it is highly corrosive to the electronics and batteries essential to keep the submersible functioning. Underwater communication, navigation and tracking can also be extremely difficult when there are kilometers of water and complicated landscapes blocking signals.

Liu Yeyao, a veteran aquanaut and chief designer of Fendouzhe, said he was excited when the vehicle first reached the 10,000-meter milestone during a test dive on Oct 27, but because he took many similar dives shortly after, he felt relatively calm when venturing into the abyss.

"Since we were already so familiar with the process, the three of us felt very calm, and I believe this serenity comes from our confidence in Fendouzhe's design and technologies," he said.

Kathryn Sullivan, a former NASA astronaut and NOAA administrator, said landing at the trench feels like "flying over a living moonscape", as the seafloor sediment was littered with small pockets, holes and mounts, which may be signs of life, though scientists suspect not many large animals can survive down here due to the extreme environment and lack of food.

"How extraordinary it is to sit in a small container, dressed as comfortable as I am, and yet be in such harsh, exotic and extreme environment," she said in an interview with Aspen High Seas Initiative, a global project promoting marine research and conservation.