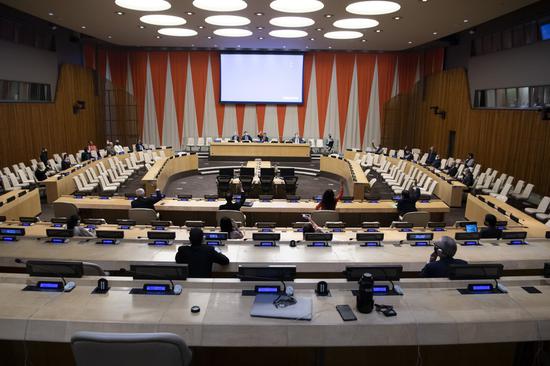 Photo taken on Oct. 2, 2020 shows a view of the United Nations Security Council meeting on the maintenance of international peace and security at the UN headquarters in New York. (Eskinder Debebe/UN Photo/Handout via Xinhua)

All in-person meetings at the UN headquarters in New York were suspended on Tuesday due to the infections of COVID-19 by five diplomats of a country's UN mission, a UN spokesman said.

"Yesterday, the UN Secretariat was informed by a permanent mission that they had five positive cases among their staff. The UN medical service immediately initiated contact tracing with the full cooperation of the permanent mission. As of now, all in-person meetings have been suspended for today," said Stephane Dujarric, spokesman for UN Secretary-General Antonio Guterres, at the regular noon briefing.

Dujarric refused to disclose the country name of the mission. Media reports said earlier that the five infected diplomats are from Niger, a member of the 15-member Security Council that last met in person on Thursday.

Diplomats said people who attended Thursday's meeting were being tested for COVID-19, and an in-person meeting on Syria planned for Tuesday was instead held virtually.