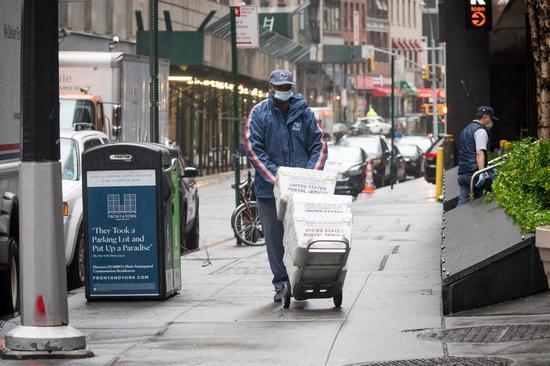 U.S. House Oversight Committee on Sunday called for the chief of the country's postal service to testify before the panel about the cost-cutting overhaul to the agency, which lawmakers worried would sabotage the presidential election later this year with expected surging of mail-in ballots due to the coronavirus pandemic.

"Over the past several weeks, there have been startling new revelations about the scope and gravity of operational changes you are implementing at hundreds of postal facilities without consulting adequately with Congress, the Postal Regulatory Commission, or the Board of Governors," House Oversight Committee Chairwoman Carolyn Maloney, a New York Democrat, wrote in a letter on Sunday to Postmaster General Louis DeJoy, who was appointed by President Donald Trump in May this year and assumed office in June.

"Your testimony is particularly urgent given the troubling influx of reports of widespread delays at postal facilities across the country - as well as President Trump's explicit admission last week that he has been blocking critical coronavirus funding for the Postal Service in order to impair mail-in voting efforts for the upcoming elections in November," said Maloney, who originally scheduled the hearing for September but decided that the hearing be held on Aug. 24.

The committee also seeks testimony from Robert Duncan, the Board of Governors chairman of the U.S. Postal Service (USPS).

DeJoy recently launched sweeping operational changes to the USPS, including a ban on extra trips by postal workers for on-time delivery, crackdowns on overtime pay and shakeup in agency leadership, which he said were aimed at addressing the agency's dire financial situation.

Critics said those measures led to delays in mail delivery and, as mail-in voting expanded across the nation due to the coronavirus pandemic, may cause possible disenfranchisement in the upcoming election.

The USPS late last month sent letters to as many as 46 states and the District of Columbia, notifying them of possible delays in the delivery of mail-in ballots, potentially resulting in those votes failing to be counted on the Nov. 3 Election Day.

"The Postmaster General and top Postal Service leadership must answer to the Congress and the American people as to why they are pushing these dangerous new policies that threaten to silence the voices of millions, just months before the election," read a statement issued Sunday by top Democrats on Capitol Hill, including House Speaker Nancy Pelosi and Senate Minority Leader Chuck Schumer.

Tensions between Democrats and the administration surrounding the USPS escalated after Trump on Thursday threatened to block the 25-billion-U.S.-dollar funding for the USPS supported by Democrats in a coronavirus relieve bill passed in the House in May. Trump said the money would assist mail-in ballots, which he has repeatedly railed against and claimed the method would cause voting fraud.

White House Chief of Staff Mark Meadows clashed with CNN's Jake Tapper during the news channel's "State of the Union" program Sunday morning over the credibility of "universal" mail-in voting, arguing states that send ballots to all registered voters irrespective of whether they have applied for them are "just asking for a disaster."

Meadows also said the White House would be willing to greenlight a standalone bill - separate from a coronavirus relief package -- that provides funding for the USPS, echoing a similar stance expressed by Trump on Thursday during a White House press briefing.