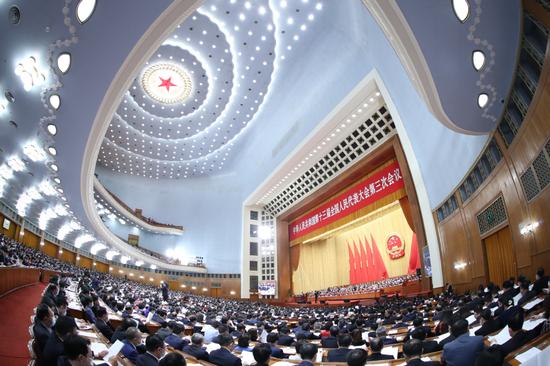 Deputies participate in the second plenary meeting of the third session of the 13th National People's Congress at the Great Hall of the People on May 25, 2020 in Beijing. (Photo/Xinhua)

Ensuring full enforcement of the Constitution and speeding up public health legislation are prioritized tasks of the top legislature this year, according to a draft work report unveiled on Monday.

"Remaining committed to upholding law-based governance in Hong Kong and Macao, we will work to safeguard constitutional order in the two special administrative regions as stipulated in China's Constitution and the basic laws, refine the system for interpreting the basic laws by the National People's Congress Standing Committee, and establish a sound legal system and effective enforcement mechanisms at the national level for safeguarding national security in the two regions," top legislator Li Zhanshu said in a work report to the third session of the 13th NPC.

Li, chairman of the NPC Standing Committee, delivered the work report at the session's second plenary meeting. President Xi Jinping and other Chinese leaders attended the meeting at the Great Hall of the People in Beijing on Monday afternoon.

A draft decision on establishing and improving the legal system and enforcement mechanisms for the Hong Kong SAR to safeguard national security was deliberated at the session.

"I am confident that through the joint efforts of all deputies, we'll be able to complete this important legislative task so as to provide a stronger legal guarantee for safeguarding our nation's sovereignty, security and development interests as well as ensuring Hong Kong's long-term prosperity and stability," Li said.

He also said the top legislature will uphold the one-China principle, resolutely oppose and restrict separatist forces seeking "Taiwan independence", and promote the peaceful development of cross-Straits relations on the basis of the 1992 Consensus.