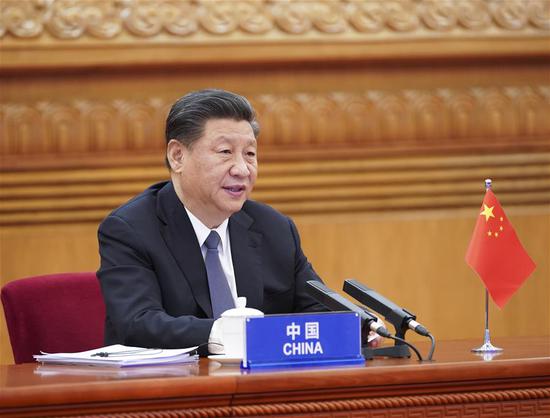 Chinese President Xi Jinping Thursday called for a resolute all-out global war against the COVID-19 outbreak as leaders of the Group of 20 (G20) convened an extraordinary summit to coordinate multilateral response to the pandemic.

"It is imperative for the international community to strengthen confidence, act with unity and work together in a collective response," Xi addressed the summit via video link in Beijing.

Calling major infectious disease the enemy of all, Xi said the international community must comprehensively step up international cooperation and foster greater synergy so that humanity as one could win the battle against the COVID-19.

The summit came as the global death toll from the COVID-19, an illness caused by novel coronavirus, has climbed over 21,000 and the number of infections has surpassed 480,000 as of Thursday, according to a count by Johns Hopkins University.

This is the first time for the leaders of the world's 20 major economies to hold a summit online since the mechanism, which used to only gather finance ministers and central bankers, was elevated to be the world's premier platform for international economic cooperation in 2008.

Stressing the outbreak is spreading worldwide and the situation is disturbing and unsettling, Xi called on countries to move swiftly to stem the spread of the virus.

He proposed that a G20 health ministers' meeting be convened as quick as possible to improve information sharing, strengthen cooperation on drugs, vaccines and epidemic control, and cut off cross-border infections.

Xi also proposed a G20 COVID-19 assistance initiative for better information sharing and policy and action coordination with the support of the World Health Organization (WHO).

Guided by the vision of building a community with a shared future for mankind, China will be more than ready to share its good practices and provide assistance in its capacity to countries hit by the growing outbreak, he said.

Xi called on countries to make a collective response for control and treatment at the international level.

China has set up its online COVID-19 knowledge center that is open to all countries, said Xi.

He said it is imperative that countries pool their strengths and speed up research and development of drugs, vaccines and testing capabilities in the hope to achieve early breakthrough to the benefit of all.

The summit was chaired by Saudi Arabia's King Salman bin Abdulaziz Al Saud. The kingdom, which holds the presidency of the G20 this year, said it organized the extraordinary meeting to advance global efforts to tackle the pandemic and its economic implications.

The leaders of G20 members were joined by their counterparts from some invited countries, including Spain, Jordan, Singapore and Switzerland, as well as the United Nations, the World Bank and other international organizations, and the chairing states of some regional organizations.

Comprising 19 countries plus the European Union, the G20 members account for about two thirds of the entire human population and some 86 percent of the gross world product.