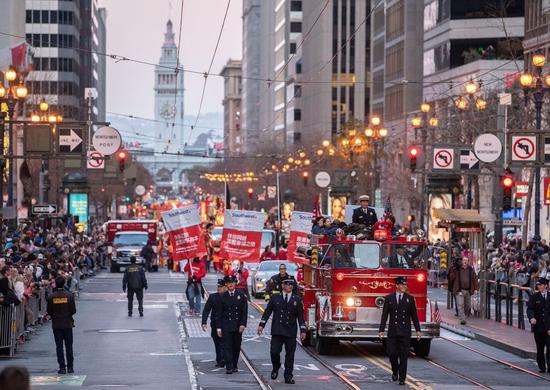 Senior U.S. Senator Dianne Feinstein Tuesday praised the growing sister-city relationship between the western U.S. city of San Francisco and China's Shanghai by saying she is proud of the partnership.

Feinstein, who was honored by the Bay Area Council for her outstanding leadership and commitment to the community at the council's annual celebration of China's New Year, said she was proud to see that San Francisco and Shanghai had forged sister-city relations during her tenure as San Francisco mayor.

"When I became mayor of San Francisco, I thought here, this is the century of the Pacific, and we can shrink that vast Pacific Ocean into a river between us, so I thought the thing to do was to develop a sister-city relationship with the city of Shanghai," Feinstein said.

The sister-city partnership has led to a large number of exchanges between China and the United States over the decades, she said.

The 87-year-old U.S. senator was the mayor of San Francisco from 1978 to 1988, and Shanghai became a sister-city of San Francisco on Jan. 28, 1980, one year after China and the United States established formal diplomatic relations.

Feinstein hoped the San Francisco-Shanghai relationship will continue to grow stronger in the decades to come.

"Over the past 40 years, Shanghai and San Francisco have made lots of progress in advancing cooperation in different areas, making due contributions to the bilateral relations between China and the United States," Wang said.

The cooperation at the sub-national level is an integral part of and the basis of bilateral relations between the two countries, Wang added.