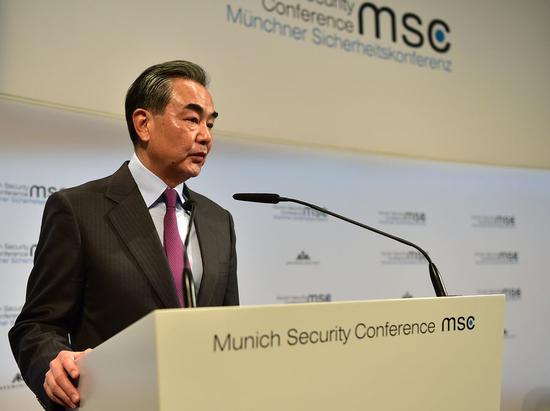 Chinese State Councilor and Foreign Minister Wang Yi responded to two U.S. officials' allegations on Saturday, saying that all U.S. accusations against China are lies, and not based on facts.

In the Q&A session after his speech at the Munich Security Conference (MSC) 2020, Wang was asked by Chairman of the MSC Wolfgang Ischinger to comment on the current Sino-U.S. relationship and its prospect, right after U.S. Secretary of State Mike Pompeo and U.S. Secretary of Defense Mark Esper attacked China at the conference.

"It seemed that wherever they go, they will repeat their complaints," Wang said. "All U.S. accusations against China are lies, not based on facts."

"But if we change the subject of the lies to the U.S., these lies would become the truth, based on the facts," Wang said.

"We hope the U.S. as a superpower would not lose too much self-confidence or reason," he said.

China and the U.S. established their diplomatic ties over 40 years ago, and there have been some problems in bilateral relations, some of which arose autonomously from bilateral exchanges, whereas others were entirely man-made, Wang said.

The root cause of those problems, Wang said, lies in the fact that some people in the U.S. are reluctant to accept the rapid development and revitalization of China as a socialist country.

"But this is unfair. China has the right to develop itself and the Chinese people have the right to live a better life," Wang said.

China's modernization is an inevitable historical trend, which Wang said represents the advancing direction of human civilization, and cannot be stopped by any force.

China's development strengthens forces to safeguard world peace and contributes to global stability, which should be welcomed by the international community, said Wang.

He underlined China is willing to work with the U.S. to advance bilateral ties featuring coordination, cooperation and stability, on the basis of equality and mutual respect.

An important task now, Wang said, is that both sides should sit down for serious dialogues and find out an interactive mode which allows the two big countries with different social systems to coexist peacefully and have win-win cooperation.

China is ready for that, Wang said, urging the U.S. to meet China halfway.