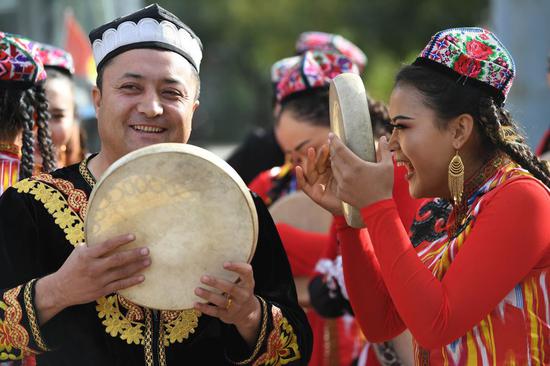 The China Society for Human Rights Studies Thursday expressed firm opposition to and strong condemnation of the passage of a Xinjiang-related bill by the U.S. House of Representatives.

In total disregard of facts and China's stern representations and resolute oppositions, the U.S. House of Representatives flagrantly approved the so-called "Uyghur Human Rights Policy Act of 2019," grossly interfering in China's internal affairs and exposing the mindset of hegemony and the logic of power politics of the United States, the society said in a statement.

"As is known to all, from the 1990s, terrorists, separatists and extremists plotted and carried out several thousand acts of terrorism in Xinjiang, killing many innocent people, leaving several hundred police officers in the line of duty dead and incurring enormous property losses," the statement said.

In the face of these real threats, Xinjiang has taken resolute action to fight terrorism and extremism in accordance with the law and in line with a series of United Nations resolutions on combating terrorism and a number of international counter-terrorism conventions, aiming to prevent the breeding and spread of terrorism and extremism through establishing vocational education and training centers and efforts in de-radicalization, the society said.

Thanks to the unremitting efforts, Xinjiang has effectively contained the frequent occurrences of terrorist activities and ensured, to the maximum extent, the rights to life and development of people of all ethnic groups, the statement said.

"Facts speak louder than words and people can tell right from wrong," the society said, noting that Xinjiang hasn't seen a single terrorist attack over the past three years, the region now enjoys social stability, ethnic solidarity, harmony among religions and the people there live and work in contentment, with all basic rights protected.

"The people of all ethnic groups living in Xinjiang have the best say on the human rights situation there," the statement said.

The society also pointed to the fact that the United States, with a bad human rights record itself, often pretends to be a "human rights defender" and frequently tells others what to do about the human rights situation in other countries.

It called the passage of the Xinjiang-related bill by the U.S. House of Representatives as "a sheer hegemonic act."