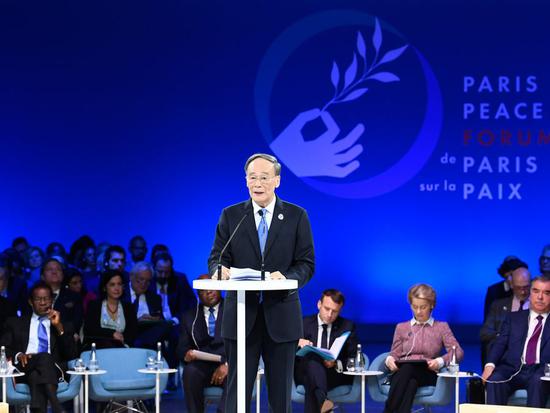 China is a champion of world peace, a contributor to global development, and a defender of the international order, said Chinese Vice President Wang Qishan at the ongoing Paris Peace Forum.

"We are ready to work with all other countries to foster a community with a shared future for mankind, champion a new type of international relations based on mutual respect, fairness, justice and win-win cooperation," Wang said in his speech addressed to over 80 heads of state and government, senior officials and heads of international and regional organizations, on Tuesday at the opening ceremony of the second Paris Peace Forum.

According to the vice president, in the 70 years since the founding of the People's Republic of China, the Chinese people have found a road of socialism with Chinese characteristics suitable for themselves. Great changes have taken place in the country, the living standards of the people have been improved, and historic achievements have been made, he told the forum.

"We are sober-minded that China is still a developing country," he acknowledged, adding China will first keep its own house in order, be cool-headed about achievements and opportunities, and maintain composure in dealing with risks and challenges.

"We will uphold and improve the system of socialism with Chinese characteristics, promote the modernization of China's governance system and capacity, and make relentless efforts to pursue the Chinese dream of great national renewal," Wang pledged.

Comparing the world today to a vast ocean in which all countries are interconnected and share a promising future and face the same challenges, he said: "No one can stay unscathed or deal with these challenges on their own. Shifting troubles to others is not the right way forward. Collective response is the only viable solution."

Through concrete actions, such as promoting Belt and Road cooperation, hosting the China International Import Expo, reducing the items on the negative list for foreign investment access and improving the business environment, China is sharing with the world the vast opportunities of its development, he noted.

Wang said: "The evolution of history is never a linear course. Only when seeing the direction clearly, can we make a rational and informed choice. The more difficulties we face, the more imperative it is for us to stay focused and patient, take concerted and vigorous actions, and let the sensible approach prevail."

The Chinese vice president expressed the hope that countries could work together to reduce peace deficit by expanding converging interests, reinforce the safeguards for peace by upholding multilateralism, overcome the challenges to peace by enhancing equal-footed consultation, and strengthen the bond of peace by encouraging dialogue among civilizations.

"We are confident that we will be able to build a world free of war and poverty, a world with security and prosperity shared by all," he emphasized.

The Chinese vice president is in France to attend the Forum from Nov. 11 to 13, at the invitation of the French side. The Paris Peace Forum was established at the initiative of French President Emmanuel Macron in 2018.

During his stay in France, Wang also met with President of North Macedonia Stevo Pendarovski and had in-depth exchanges with Macron and other French friends.