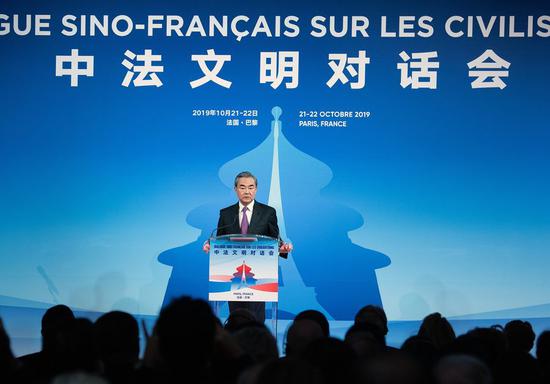 Chinese State Councilor and Foreign Minister Wang Yi gives a speech while attending the opening ceremony of the Sino-French Dialogue of Civilization in Paris, France, Oct. 21, 2019. (Photo by Jack Chan/Xinhua)

Chinese State Councilor and Foreign Minister Wang Yi called for equality, inclusiveness and cooperation among civilizations when attending the opening ceremony of the Sino-French Dialogue of Civilization on Monday.

Wang said in his speech that China and France, as major representatives of the Eastern and Western civilizations, have respectively created profound, extensive and excellent cultures, which enjoy a long history of exchanges.

Over the past centuries, the two sides have been admiring and learning from each other, becoming a model for exchanges and mutual learning among different civilizations, he said.

In a world which is undergoing changes unseen in a century, China and France, as two major civilizations, should have a broad mind, and let the light of equality, inclusiveness and cooperation shine forever in human civilizations, Wang said.

Civilizations should treat each other equally and cherish the merits of their own, Wang said, adding that China opposes any form of "superiority of civilization" or "clashes of civilizations," and respects and supports all countries and nations in inheriting and developing their own civilizations, and independently choosing a development path that suits their national conditions.

He added that different countries and civilizations should respect, understand, accommodate and help each other so as to achieve common development.

Wang said countries should also cooperate and develop together to make different civilizations exist in harmony. Facts have proven that cooperation is the only right choice, while self-isolation is out of accord with present times, and unilateralism is against the will of the public.

Under the guidance of intiatives for jointly building the Belt and Road and a community with a shared future for humanity, China is willing to adhere to and carry forward the ideas of multilateralism, deepen cooperation with other countries and make unremitting efforts to push forward the overall development of human civilization.

Before the opening ceremony, Wang also attended the booting ceremony of the documentary "Versaille and China (Versaille et la Chine)," to be co-produced by China Media Group, TV5Monde and Mediawan.