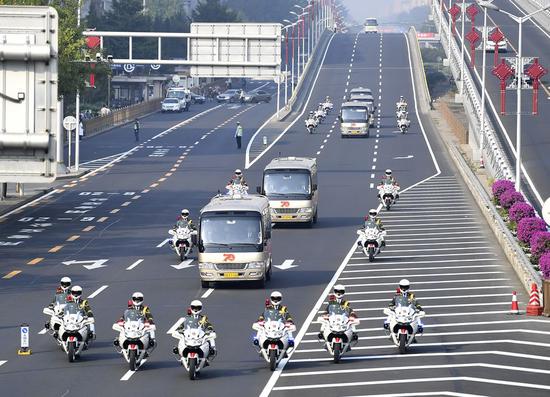 Escorted by a motorcade, awardees of China's national medals and honorary titles head for the Great Hall of the People in Beijing, capital of China, Sept. 29, 2019. (Xinhua/Yan Yan)

President Xi Jinping on Sunday presented national medals and honorary titles of the People's Republic of China (PRC), the highest state honors, to dozens of individuals ahead of the 70th founding anniversary of the PRC.

Xi, also general secretary of the Communist Party of China Central Committee and chairman of the Central Military Commission, helped the awardees put on the medals and shook hands with them at a ceremony in the Great Hall of the People. Representatives received medals for some of the honorees.

Noting that the awardees are outstanding representatives of the people who contributed to the cause of the Party and the people, Xi said their deeds and contributions will always be marked in the history of the PRC.

When people respect and advocate heroes, more heroes will emerge, Xi said, adding that the Party and the state have always attached great importance to honoring heroes and role models.

"Today, we honor these heroes and role models with the highest standards to promote their qualities of loyalty, perseverance and humbleness," he said. 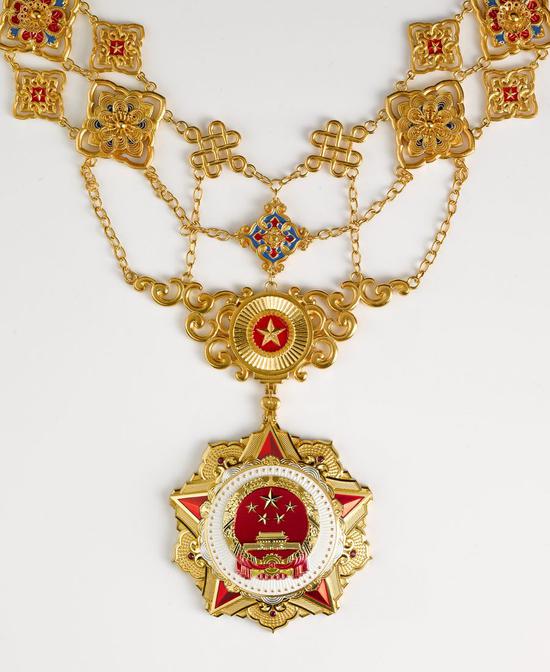 The Medal of the Republic. A ceremony to grant national medals and honorary titles to the honorees is held in the Great Hall of the People at 10 a.m. Sept. 29, 2019. (Xinhua)

"Heroes and role models once again demonstrate with their actions that greatness comes out of the ordinary," Xi said, adding that adhering to firm ideals and convictions and working tirelessly to do their jobs, every ordinary person can have an extraordinary life and every ordinary job can produce extraordinary achievements.

He encouraged the awardees to cherish the honor and influence more people with their strong faith, beliefs and confidence.

"We have sincere gratitude to the recipients of the Friendship Medal for their contribution to China's development," said Xi, adding that Chinese people are willing to work with people of all countries to build a community with a shared future for humanity and to make the planet a better place.

Earlier this month, Xi signed a presidential decree to confer these honors in accordance with a decision adopted by the National People's Congress Standing Committee.

Huang Xuhua and Thai Princess Maha Chakri Sirindhorn spoke at the ceremony on behalf of the awardees.

Xi and other leaders joined the awardees for a group photo after the ceremony.