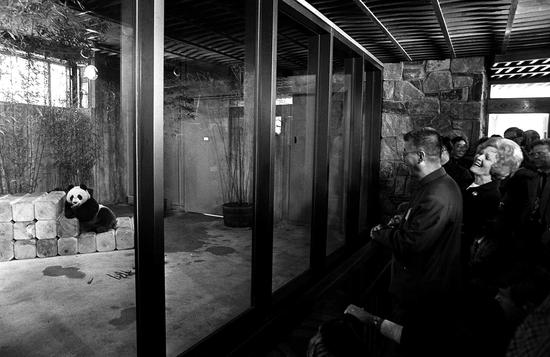 The story of pandas living in the U.S. began with the historic visit of then-U.S. president Richard Nixon and first lady Pat Nixon to China in 1972. After Mrs. Nixon expressed interest in the animals, Premier Zhou Enlai presented two giant pandas to the American people, Ling Ling and Hsing Hsing, as a symbol of goodwill.

The pair's arrival at the Smithsonian's National Zoo in Washington DC on April 16, 1972, attracted 20,000 people. In the following month, they received more than 1 million visitors. The bears' arrival marked a new chapter in the U.S.-China history.

To commemorate 50 years of hosting and caring for giant pandas, the zoo has been conducting a series of events online and offsite.

The events, which will run through Aug 27, included the Giant Panda Family Tree Photo Gallery in the outdoor giant panda exhibit since March 16, the premiere of the Smithsonian Channel's documentary The Miracle Panda on April 16 and 17; and other activities, details of which can be found in full on the zoo's website.

While the National Zoo is hosting the six-month celebration, conservation experts from three other American zoos, which all have engaged in cooperative research programs with China over the years to learn about pandas, spoke with China Daily about their work to protect the beloved furry animals.

The San Diego Zoo's conservation program kicked off in 1996 when giant pandas Bai Yun and Shi Shi arrived after a 12-year research loan agreement was reached with China.

The zoo's scientists have helped develop breeding strategies and reintroduction techniques, managed the well-being and health of the animals and enhanced the understanding of the dynamics of wild giant pandas in the face of climate change and the implementation of an expansive protected area system in China, she said.

"For each of these, our conservation strategy has been to listen to our partners and ensure that our scientific and husbandry activities were supporting our overall objectives to grow a thriving and genetically diverse giant panda population," Owen said.

Through its works, the zoo developed early pregnancy tests and a milk formula for panda cubs that raised survival rates from zero to 100 percent. At the same time, the zoo's scientists learned from their Chinese colleagues important details about the panda's system of social communication and the critical habitat to support the pandas in the wild.

"Beyond our shared scientific findings, we have also gained invaluable lessons about international conservation partnerships and about how open communication and information sharing along with a singular commitment to conservation can reverse dire situations for wildlife," she said.

The scientists' work has greatly boosted the pandas' survival rate. In 2010, the population of pandas in human care has reached the milestone of 300 bears, the minimum necessary to sustain genetic diversity for the next 100 years, according to the zoo.

During her stay in San Diego, Bai Yun became a productive matriarch who gave birth to six cubs, one of whom was fathered by Shi Shi. Her other five offspring were all sired by Gao Gao, a male panda who replaced the ailing Shi Shi as Bai Yun's mate when the latter returned to China in 2003.

Owen said it was mesmerizing and fascinating to watch the pandas eat bamboo. Bai Yun, who "with extraordinary jaw strength" was able to "fell a mature bamboo timber with one bite and then sit down and delicately and patiently strip the outside coating off of each piece she selected to eat", she said.

"Day in, day out, I never got tired of observing this special giant panda behavior," Owen said.