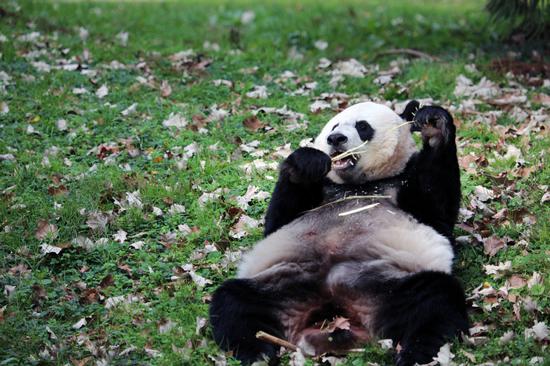 Giant panda Mei Xiang, who gave birth to a cub three months ago, chomps on sugar cane at the Smithsonian's National Zoo in Washington on Sunday. (Photo by Zhao Huanxin/China Daily)

Americans will celebrate their newest giant panda cub by formally giving him a name on Monday, but they face a somber reality: The loan agreement of the newborn's parents, the bears who came to the National Zoo 20 years ago, will expire on Dec 7.

"It is our hope that we will have these pandas for just a few more years," Dr Steven Monfort, director of the Smithsonian's National Zoo and Conservation Biology Institute, told China Daily on Sunday.

"And then in the future, after they go to China, in the long run, we'd very much like to keep this relationship going, and maybe that means another agreement with a different set of pandas," he said.

Right now, the only thing the National Zoo has requested was an extension for Mei Xiang and Tian Tian, the current pair, instead of asking for any new pandas, according to the zoo chief.

Monfort went to Beijing for talks about the loan in January, right before the COVID-19 pandemic stopped travel. He said he is now waiting for "our Chinese colleagues to give a final answer".

The Giant Panda Cooperative Research and Breeding Agreement, signed between the National Zoo and the China Wildlife Conservation Association, has been renewed by five-year terms twice since the first 10-year loan expired in 2010.

The deal that last extended in 2015 ends in early December.

Wearing a mask and speaking near the panda's outdoor habitat at the zoo, the veteran conservation biologist said that the birth of the panda cub sparked a great joy during the pandemic.

The zoo has asked Americans to select from possible names chosen by the zoo and partners in China. The name that receives the most votes will be bestowed on the cub Monday.

The cub, born on Aug 21, is the fourth surviving cub born at the National Zoo in more than four decades since the first pair, Ling Ling and Hsing Hsing, arrived in April 1972, weeks after then-U.S. president Richard Nixon's historic China visit.

Over the next 20 years, that couple produced five cubs, but none survived more than a few days.

The arrival of a new couple, Mei Xiang and Tian Tian, in 2000 changed the situation. Between 2005 and this year, Mei Xiang, age 22, has given birth to four surviving cubs.

"When he was born, everyone had been suffering for so many months," Monfort said. "This is just a time when we think about something very joyful and happy to forget about all the troubles for just even for a few minutes every day."

At least 1.5 million people have watched the zoo's Panda Cams since the cub was born. The panda zone has been closed since March due to the pandemic, making the 24/7 web camera the only source for people to see the cub and his parents, according to the zoo sources.

Monfort also said the partnership between the National Zoo and China on the panda is an example that "great things" happen if people work together with passion for a long time.

"The National Zoo and the Smithsonian and its relationship with China on the panda is one of the longest collaborative partnerships and conservation that's ever existed," he said. "As a result of that, great things have happened."

He said the Chinese government has done a "fantastic" job of setting aside reserves and protecting the pandas, and the U.S. side has been helping by adding additional knowledge and technical expertise.

"Clearly, we support what the Chinese government is trying to do," he said. "We don't own the pandas, but the whole world wants to help save the panda, and we do that through our knowledge exchange."

Monfort said the pandemic has disrupted the exchange of zoo researchers between China and the U.S., but they were in "close correspondence".

During the pandemic, some people have expressed their concerns about the nutrition of Mei Xiang after her delivery and the "extremely narrow space" of the den where she gave birth.

For example, an article complaining about panda "mistreatment", which was posted on the Chinese news portal NetEase on Oct 30, had generated nearly 10,000 comments by Sunday.

Monfort said, "We invest very, very heavily in making sure that every single animal that we care for, but especially the panda, is taken care of at the highest level of excellence."

When it comes to the den size, Monfort said that when she gives birth, just like in the wild, a panda will seek out a smaller, comfortable, safe space. The den is something that Mei Xiang chose herself, as the panda has access to anywhere she wants to go, he added.

Marty Dearie, who has been taking care of pandas over the past 11 years, said a panda usually does not eat much in the first couple of weeks, up to a month, to focus on the cub. He and his colleagues offered bamboo, sugar cane and some treats to Mei Xiang to make her happy when they entered the den to check on the cub.

Asked if there is any disruption to the supply of food, especially bamboo, Dearie said, "We have about 30 to 40 sites all around the region that our nutrition team goes and cuts bamboo from, and then all the produce and biscuits and things, none of those ever stopped during the pandemic."

The pandemic, which is raging in the U.S. and has caused at least 254,000 deaths as of Sunday evening, does not have a major impact on the day-to-day operations at the zoo, where animals, including pandas, are getting the attention under the regular standards at the zoo, according to Dearie.

"Both the cub and Mei Xiang are continuing to gain weight. They're both doing fantastic, and we couldn't be happier," he told China Daily.

Dearie added that the 3-month-old cub is "right on cue" in terms of his development and growth rate and might be "getting close to walking", as he was spotted starting to get his back legs underneath his body.

But he said the cub will not be allowed to go outside until sometime in January, when he gets vaccines against distemper and rabies.