Finnish zoo denies reports of sending pandas back to China: they are doing great 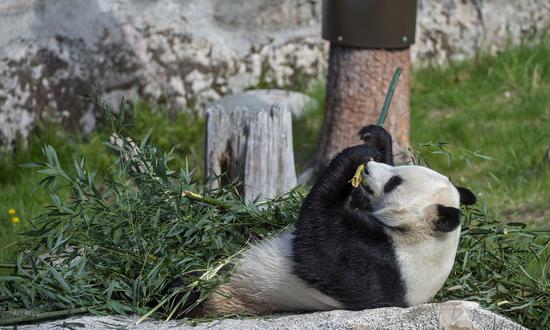 One of giant pandas living in the Ähtäri Zoo eat bamboo. （Photo/Courtesy of Ähtäri Zoo)

An employee of the Ähtäri Zoo in Finland that has kept two giant pandas since 2018 told the Global Times on Thursday that the zoo has not yet discussed any details concerning sending the pandas back to China, and the zoo has not had any delays in bamboo supplies for their pandas.

Some reports have previously said that the Finnish zoo had finance troubles amid the COVID-19 epidemic, and one of the reasons for their financial difficulties was the high fees required to supply 30-kilograms of bamboos to their giant pandas every day, with some reports saying that the zoo has decided to send its pandas back to China, along with another zoo in Canada.

Two giant pandas “Jinbaobao” and “Huabao” flew by airplane to Finland on January 2018 from China. They would live at ÄhtäriZoo for 15 years.

Lea Lahtinen, communication manager at Ähtäri Zoo, denied these reports, adding that they have not discussed sending their pandas back. “All our animals, including pandas, are doing great,” Lahtinen wrote in an email to the Global Times.

Lahtinen also introduced the current feeding routine for their pandas. One panda requires about 15-30 kilograms of bamboo each day, with the zoo transporting bamboo from the Netherlands by lorries at least once a week. Lahtinen added that there have been no delays in their supplies.

The Calgary Zoo in Canada was also reported in May to have urged the Canadian and Chinese governments to expedite the necessary permits to allow the return of two giant pandas to China, as a lack of flights amid the pandemic had caused issues to the shipment of high-quality bamboo from China.

The Ähtäri zoo had recently reopened on June 1, receiving a good number of visitors. As the park is large, these visitors can maintain social distancing norms during their tours, Lahtinen said. The peak visiting season, from June to August, is quickly approaching.

After suffering impacts caused by the virus, the zoo had been closed from March to May.