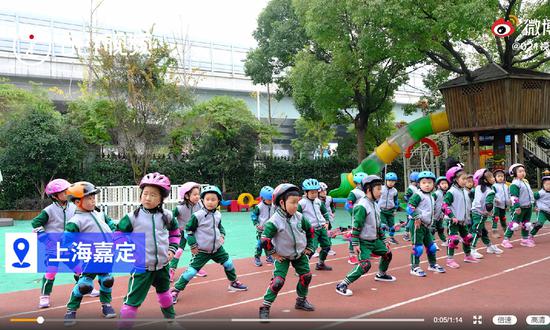 A kindergarten in Shanghai has recently rolled out a series of “diet plans” to help obese kids lose weight, including special low-fat meals and exercise programs. (Photo/Screenshot of 021 Video on Sina Weibo)

A kindergarten in Shanghai has recently rolled out a series of "diet plans" to help obese kids lose weight, including special low-fat meals and exercise programs. Children who join the program will also wear smart bracelets, allowing parents to track heart rates and other indexes to help adjust plans better suited for their kids.

"We conduct physical examinations for every newly-enrolled student, and we have found obesity among kids a serious issue, as it takes up an increasingly larger percentage every year," a school nurse explained in a video circulating on China's twitter-like Sina Weibo, which gained over 10,000 likes over a short period.

By increasing the amount of vegetables and the intake of protein, coupled with more exercise such as running and jumping, the obesity rate is gradually dropping.

In addition, children on this program have also been provided with smart bracelets, from which parents can see the amount of exercise and heart rates of their children through mobile phones in real time, so as to timely adjust their exercise plans both at school and at home.

"I wish I had such warm-hearted teachers back in my school days, so I wouldn't worry about it now," a netizen commented, calling for such programs to be promoted nationwide.

Children in China have become heavier in recent years. About 10 percent of children under 6 years old are obese, and the rate reaches 20 percent for children aged 6 to 17, according to a report released by China's National Health Commission on December 23.

Frequent consumption of sugary drinks is a prominent cause, said the report. About one-fifth of primary and middle school students in China "often" drink sugary beverages, it noted.