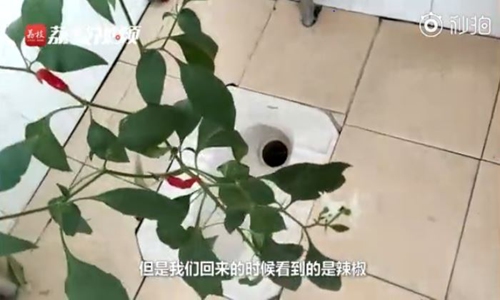 A chili plant is found growing in a student dorm's toilet in a university in South China's Guangdong Province. (Photo: Screenshot of a video posted by Lizhi Video)

Chinese college students returning to campus have found uninvited guests in their dorms, which have been unoccupied for eight months due to the coronavirus pandemic.

A sophomore student in Central China's Henan Province was surprised to find that the sweet potato she left in the dormitory eight months ago had sprouted and grown into a two-meter vine after she moved back, reported Pear video on Monday.

The student, surnamed Guo, joked that she and her roommate decided to wrap the vines around the bed and ladder for decoration, and were preparing to harvest sweet potatoes soon.

An even weirder story happened in a university in South China's Guangdong Province - a chili plant was found growing in a student dorm's toilet. The widely circulated video filmed by a student showed a chili plant growing out of a squat toilet, complete with fruit and white flowers.

The students at the dorm said that they have pulled out the plant, even though they found it funny and strange when they were greeted by it.