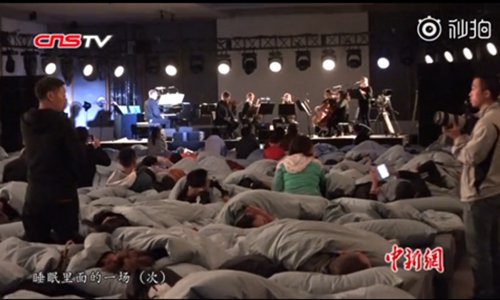 Audiences can sleep when they listen to the concert. (Photo/Screenshot of video posted by China News Service)

A special concert lasting eight hours, held near the section of the Great Wall in Beijing on Oct. 4, encouraged the audience to sleep during the performance.

The concert was held at a large meeting hall in Yanqing district of Beijing. More than 300 beds, complete with pillows and quilts, were laid out in the hall. Each bed was numbered like seats at a regular concert hall and concertgoers had to find the bed that corresponded to their ticket. A video posted by China News Service shows musicians playing on a stage with beds filling almost every available space of the hall. People took their children to the concert which lasted from 10 pm to 6 am. Many said they had never dreamed of experiencing such a concert.

Lu Chao, one of the audiences, told the China News Service that "the pace of life is so fast these days. The slow and relaxing concert gives us a real break."

The music played at the concert was awarded a Guinness World Record for its length in 2015.