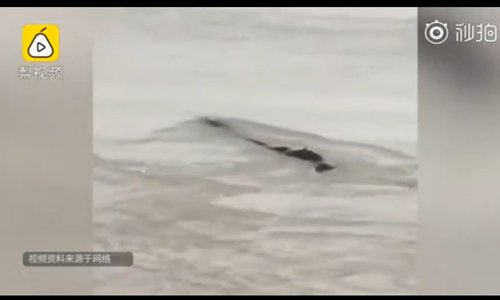 The black object seems to swim on the surface of the river. (Photo/Screenshot of the video posted by Pear Video)

Several videos posted by netizens on Chinese social media show what appears to be a meter-long black creature slithering through the waters of the Yangtze.

The viral videos were said to be shot from a ferry dock in Yichang, Central China's Hubei Province and appear to only show small portion of what could be imagined to be a giant creature's body breaking the surface of the water.

The video has led some netizens to both fear and hope the reservoir behind the world's largest dam had spawned its own monster.

A professor of Huazhong Agricultural University added to anxieties and raised expectations by telling Pear Video that the creature might be a huge water snake.

Ding Li, a snake and reptile expert, raised some doubts saying the slithering object might be something that got snagged on the bottom of the reservoir, the Paper reported.

Finally, another netizen revealed the truth, saying that he saw the "creature" when he was fishing near the ferry terminal.

"It is not a monster, it's just a large piece of floating black plastic," he said.

Finally, another netizen revealed the truth, saying he saw the "creature" when he was fishing near the ferry terminal. "It is not a monster, just a large piece of black plastic," he said.

A close look at the video shows the object is stationary and the passing river current causes the end of the object to slither like a snake's tail.