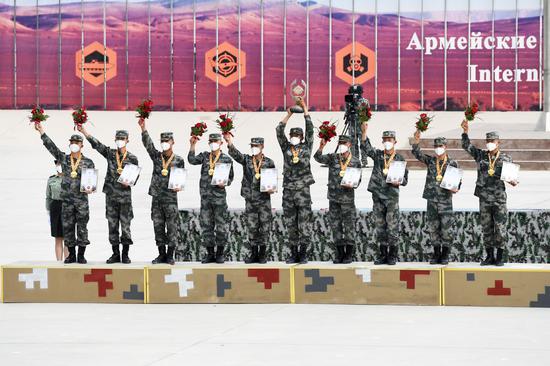 The International Army Games 2021 ended on Saturday after two weeks of competitions, with the Chinese military participating in events held in Northwest China's Xinjiang Uygur autonomous region as well as in Russia, Belarus, Uzbekistan and Iran.

More than 5,000 troops in 277 teams representing over 40 countries and regions competed in 34 events over the two weeks. China's People's Liberation Army sent 20 teams made up of more than 700 troops to compete.

The Chinese military participated in 17 contests overseas, finishing second in 11, third in five, and fourth in one.

Major General Zhu Xiaohui, deputy commander of the PLA Ground Force of the PLA's Central Theater Command said during the closing ceremony in Korla on Saturday that 182 contestants from seven countries had competed hard during the 14-day event in the city, showed superb skills and achieved impressive results.

Zhu said the contestants also took an active part in cultural exchange activities and that the games had helped "deepen understanding, enrich the meaning of military competition and achieve new results in communication and cooperation".

Lieutenant Li Quanjie, a vehicle commander in the PLA's Suvorov attack team, told China Central Television that the games had served as a platform that "not only hones our military skills and showcases our country's military strength, but also facilitates communication with soldiers from other countries, allowing us to learn from each other".

Major Zhang Cunzhou, an instructor for China's clear skies team, said, "The competition has shown me not only the shortcomings in our professional training, but also the serious attitude of contestants from other countries and their ability to adapt to new equipment quickly.

"We will return with what we have learned from this competition and aim to strengthen our combat capabilities."

The International Army Games is an annual military sports event that has been organized by Russia's Ministry of Defense since 2015. The PLA has co-hosted the event since 2017.

This year's Games kicked off on Aug 22, with Russian President Vladimir Putin addressing the opening ceremony in Moscow. He said the event has made a significant contribution to direct communication among military professionals, the development of trust and partnership and peace and international security.