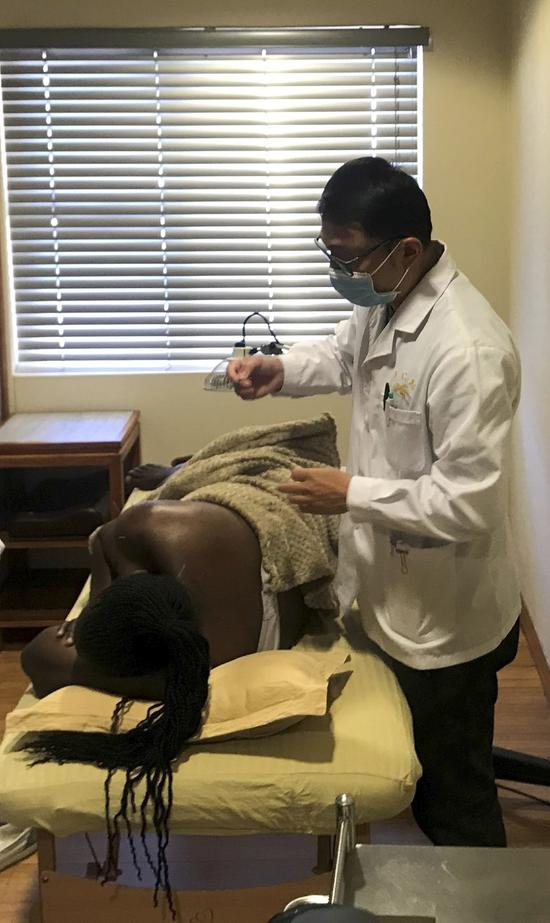 A traditional Chinese medicine (TCM) clinic in the Namibian capital Windhoek has brought hope and improved health for many locals.

"In treating patients, the focus is on giving hope and better health to people," Wang said.

Witnessing improved health first-hand, locals are attesting to the impact of TCM.

Mwahangapo Veico, from Windhoek, suffered a stroke in early 2020. Although she underwent various therapeutic exercises, she was not progressing speedily.

Through a referral, in August last year, she visited the clinic. After a few sessions of acupuncture and therapy, the 66-year-old Veico's health started improving.

Though with fears of needles and mistrust in the beginning, as the TCM-oriented external treatment works, she has become a regular patient. She is now optimistic about her future which once seemed bleak.

"It was striving for good health and good care received here brings me back. I call it a second chance to live," Veico said.

According to Wang, at first, many people did not believe in the use of needles and other external treatment methods because they are used to the orally-administered medication and other methods.

"But we have helped demystify general beliefs that the needles used in acupuncture are painful," he said.

Over time, the clinic gained popularity among locals through referrals and word of mouth by patients. To date, the cumulative number of patients treated since the clinic's inception stands at 2,500. Some patients even come from as far as local towns such as Oshakati, Ondangwa and Katima Mulilo in the northern part of the country.

"We had a patient from Katima Mulilo who came in a wheelchair. After two sessions of acupuncture, he improved. Many people come to us; the patients got outstanding results and are satisfied with the treatment," he said.

The accelerated progress of patients is also attributed to the diverse and integrative treatment approach the clinic employs.

"To ensure holistic recovery of patients, we also recommend therapy and physical activity for rehabilitation depending on the condition," Wang added.

He is also pleased that TCM is getting more recognition for its impact nationwide, especially within the medical fraternity.

"The local doctors administering western medicine do much work to help the patients. But if not resolved, some refer patients to me. It gives me satisfaction that they acknowledge the impact of TCM and know that we can help each other bring back health to people. Certainly, our treatment is supplementary," Wang added.

Meanwhile, Wang said TCM registration into the healthcare system in Namibia by the Namibia Association of Medical Aid Funds in March 2020 has enabled more locals to access TCM.

"So far, we have several medical aid funds that made provision for TCM. This means that patients now get to enjoy the benefits of treatment as the demand for TCM in Namibia grows," Wang said.

In the interim, his vision is to run the clinic sustainably and build a reputable company.

"Moreover, to educate more locals about TCM. I hope more people can know more about it and the benefits thereof," he said.

Wang attributes his wealth of experience to skills gained during his tenure as a medical volunteer at the Katutura State Hospital Chinese Acupuncture Department in Windhoek between 2014 and 2016.

The 42-year-old doctor has also worked in various capacities at the Affiliated Hospital of the Zhejiang Chinese Medical University of China, where he served for ten years.