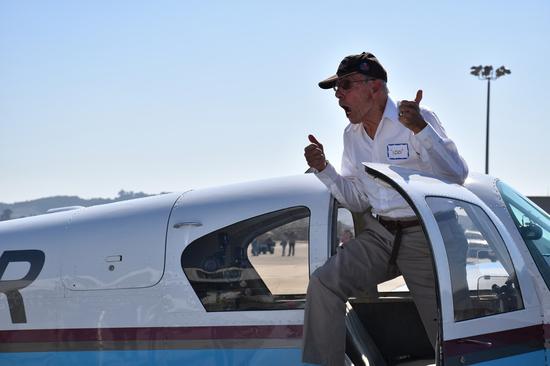 "It was wartime, so we had a hard time over there, but nothing compared to the suffering the Chinese had to bear from the indiscriminate bombing raids of the Japanese," says Harry Moyer.

"We must keep the bond between the U.S. and China alive. It was forged in blood and honor," said Harry Moyer, a veteran pilot who flew with the famed "Flying Tigers" 76 years ago in China to help the Chinese combat the Japanese invasion.

Moyer celebrated his centennial birthday on Friday by taking a solo flight. He was feted by a joyful crowd of family, friends, the press and well-wishers at the San Luis Obispo County Regional Airport, where they had all gathered to celebrate his birthday and contribution to WWII victory.

Moyer spoke from the heart about his love for flying and his eventful war years in the "Flying Tigers," before taking off into the skies in his Mooney MK21 plane.

"Out in that wide, blue sky, dipping in and out of the clouds -- the sense of space, of freedom," he mused. "Nothing compares to being up there," he told the gathering. 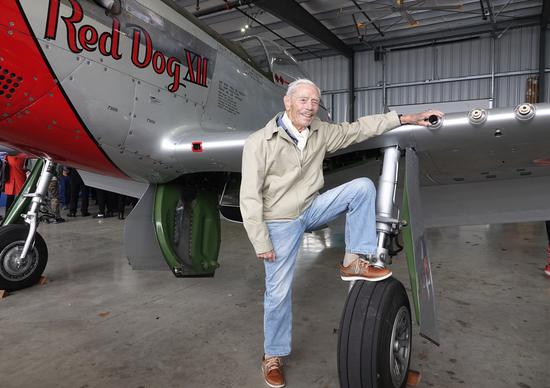 Moyer joined the U.S. Army Air Corps in 1942. He is noted for serving with distinction in combat in different theaters of operations during WWII.

Moyer's squadron joined the 23rd Fighter Group of the 14th Air Force in China in 1944 and was primarily responsible for protecting Chinese airfields and the B-29 bombers stationed there tasked with counter-attacks on Japan.

"We just did what we had to do," he said humbly.

Growing up, Moyer told Xinhua, he had always felt a connection with China. His father had Chinese friends who owned a restaurant in town, so he became friends with the owner's son. Then he read "The Good Earth" by Pulitzer and Nobel prize-winner, Pearl S. Buck, which made him long to visit China.

So, even though he had already served his allotted time as a fighter pilot during WWII and was due to go home, when he heard General Claire Lee Chennault, who he considered a visionary wartime leader, was looking for pilots to serve in China, Moyer didn't hesitate to go.

"I really respected the man and his farsighted fighter tactics," he said of Chennault. "I was so happy to be able to work with him and the Chinese. That was the highlight of my flying career."

"It was wartime, so we had a hard time over there, but nothing compared to the suffering the Chinese had to bear from the indiscriminate bombing raids of the Japanese," he told Xinhua.