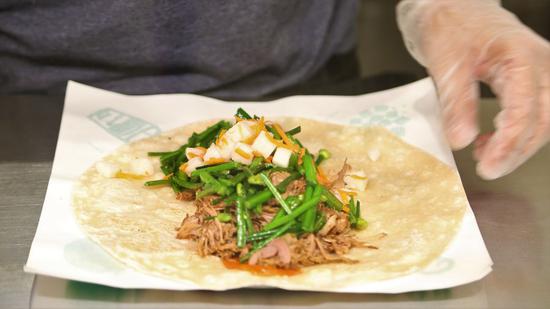 When Zhao Yong was pursuing his PhD in Yale University in the early 2010s, he was frustrated to learn that some local Chinese restaurants he frequented would no longer be there in the near future due to low profit margins and increasing labor costs.

"Most of the them were run by families of the older generations of Chinese immigrants, and the owners had told me their children would not follow in their footsteps," said the environmental science major from northeastern China's Liaoning province.

With a perpetual crave for the taste of home, Zhao and six of his college mates from China saw a big opportunity through this looming crisis, which was to establish a fast-casual chain that could represent the new generation of Chinese restaurants and redefine Chinese food in the United States.

In 2015, the first Junzi Kitchen was opened in New Haven, Connecticut, just across the Yale campus. The menu was mainly composed of chun bing, or flour wraps, and noodle bowls, with a variety of options for customizing by adding meats, vegetables and sauces.

Today, the chain has expanded to five restaurants, three of which are located in Manhattan, New York City.

"As Americans' knowledge and understanding of modern China keeps developing, here lies a huge market for a new generation of Chinese food to grow in America," Zhao, now CEO of Junzi, told Xinhua in the chain's midtown Manhattan restaurant earlier this week.

"The Chinese culinary culture is just way too profound for ordinary Americans to appreciate all the dishes," Zhao explained. "Although most of them love Chinese cuisines, they don't go to an ordinary Chinese restaurant everyday, especially for those who live in small cities and the countryside."

That's why Junzi keeps its flavors simple, which means accessible to as many Americans as possible, while staying authentic to Chinese taste buds. Similarly simplified is the way of cooking, as most ingredients are prepared beforehand and laid out for customers to create their favorite combinations, just like in a kitchen.

The interiors of Junzi's five locations also look different from their traditional peers. Designed by some of the co-founders who studied arts and architecture in Yale, they are all simple, clean, bright and chic, or just as Instagrammable as the food. This also plays a vital part in attracting more young foodies who demonstrate their lifestyles through what and where they eat.