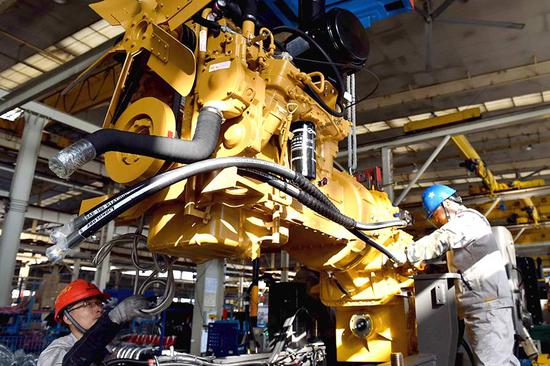 Employees of an engineering machinery manufacturer in Shandong province work on the company's production line of loaders. (Photo/Xinhua)

China pledged a host of measures to boost the economy and stabilize the capital market on Wednesday, restoring market confidence as the economy faces fresh headwinds.

The nation will step up efforts to "keep the economy within an appropriate range and maintain the stable performance of the capital market" while upholding market-oriented principles and deepening reform and opening-up, said a key meeting chaired by Vice-Premier Liu He on Wednesday.

Related authorities should "actively roll out policies conducive to the market and remain cautious when introducing any measures that have contractionary effects," said a statement released after a meeting of the State Council's financial stability and development committee on Wednesday.

The meeting called for proactive steps by monetary authorities to bolster first-quarter economic performance, measures to resolve the risks faced by real estate enterprises and promote a new development pattern in the sector, and steps to complete the rectification of big platform firms as soon as possible while boosting the healthy growth of the platform economy.

The meeting also said that Chinese and US regulators have made positive progress on issues related to Chinese firms listed in the United States and are working on specific cooperation plans.

"The (meeting) statement mainly served the purpose of guiding market expectations as it sent a signal that top policymakers were aware of market concerns and the policy stance would stay accommodative," said Maggie Wei and Shan Hui, China macroeconomists with Goldman Sachs. "We think concrete policy easing measures will be needed soon to support overall economic growth," they said.

Iris Pang, chief China economist at Dutch bank ING, said she expects the People's Bank of China, the nation's central bank, to front-load interest rate cuts in the first half of the year despite its US counterpart's tightening to bolster consumption.

In line with the meeting's requirements, China's central bank said in a statement on Wednesday that it will proactively maintain proper growth in new loans and beef up support for smaller businesses.

The China Securities Regulatory Commission said on Wednesday that it will encourage listed companies to ramp up share buybacks, improve the mechanism to support private companies' bond financing and enforce new regulations to keep the channel of overseas listings open.

Regarding property sector regulations, the Ministry of Finance said on Wednesday there are no conditions this year for expanding the trials of property tax reforms. The China Banking and Insurance Regulatory Commission said that it will encourage loans to support mergers and acquisitions of real estate enterprises.

Wu Shenkuo, a law professor of the Internet Development Research Institute at Beijing Normal University, said the meeting signaled that "stability" will be the trend for the future of the platform economy, with supervision becoming more foreseeable and transparent.