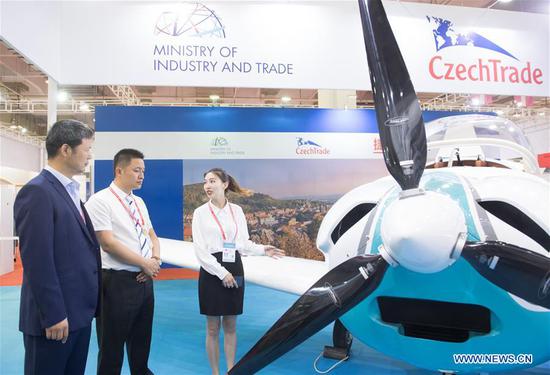 The second China-CEEC Expo will help China to share its market opportunities with the 17 Central and Eastern European countries and assist the recovery and growth of the global economy, senior government officials said on Wednesday.

The second edition of the expo will be held in Ningbo, Zhejiang province, from June 8 to June 11 and will have trade shows in three categories: the CEEC exhibition, the international consumer goods exhibition and the permanent exhibition of imported commodities, said Zhu Congjiu, vice-governor of Zhejiang.

The exhibition will have a total floor area of 200,000 square meters. More than 2,000 exhibitors and 6,000 buyers are expected to participate in the event.

"In the coming five years, we will strive to import $20 billion of commodities from Central and Eastern European countries, realize over $1.5 billion worth of two-way investment, and increase our cross-border e-commerce trade with the countries by over 30 percent on average every year," he said.

The official said that China will accelerate its pace in fostering a new development paradigm, continue to open its door wider, and take a more active part in bilateral, multilateral and regional cooperation that delivers higher levels of mutual benefit for all parties.

Bilateral trade between China and the CEE nations surged by 50.2 percent on a yearly basis to $30.13 billion in the first quarter of this year, while Poland, the Czech Republic and Hungary remained China's top three trading partners in the region, data from the Ministry of Commerce and the General Administration of Customs showed.

Zhang Shaogang, vice-chairman of the Beijing-based China Council for the Promotion of International Trade, said Central and Eastern European countries have comparative advantages in mechanical and electrical products, automobiles and parts, agricultural and textile products, minerals, raw materials and other goods. There is huge room for China to expand imports from these countries, he said.

The enhanced teamwork between the two sides has developed a number of principles that are reflective of the respective distinctive features and accepted by all parties, such as making decisions through consultation, delivering benefits to all cooperation partners, pursuing common growth through openness and inclusiveness and achieving better growth via innovation, he said.

Since its inception in 2012, the China-CEEC cooperation mechanism has become an all-around, multilevel, wide-ranging and multidimensional platform for mutually beneficial cooperation with progress in trade, investment, contracted engineering projects and connectivity.

Total trade between China and the 17 Central and Eastern European countries surged by 8.4 percent on a yearly basis to $103.45 billion last year, exceeding $100 billion for the first time, higher than the growth rates of China's foreign trade and its trade with the European Union during the same period, data from the General Administration of Customs showed.

Eager to further enhance business ties, the Ministry of Commerce signed memorandums of understanding on investment cooperation and trade promotion with its counterparts in Albania, Serbia, the Czech Republic and Hungary in the first quarter of this year.

Despite COVID-19, investment cooperation between the two sides has continued to grow, Ren, from the Ministry of Commerce, said. The two sides to date have invested nearly $20 billion in each other's markets, covering car components, the chemical industry, home appliances, logistics and mining.

Enthusiasm in two-way investment continued to remain strong during the COVID-19 pandemic, with the green and low-carbon sector, medical and healthcare, as well as new energy becoming new growth areas.

The upcoming expo, together with the just concluded China International Consumer Products Expo and the upcoming China International Import Expo, signal the nation's steady economic recovery and long-term upward momentum as the pandemic has been effectively curbed and controlled in China, said Zhang Yongjun, a researcher at the Beijing-based China Center for International Economic Exchanges.