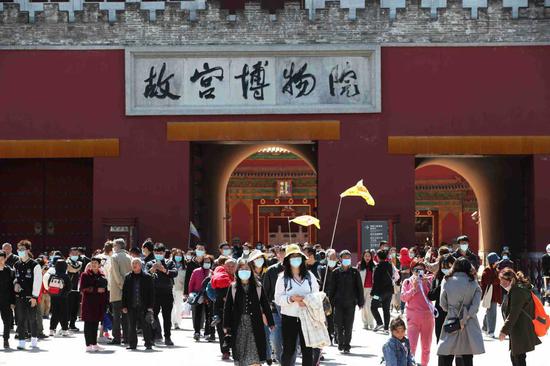 People visit the Palace Museum in Beijing on April 3, 2021. (Photo/IC)

Data from the Ministry of Culture and Tourism indicated during the holiday about 102 million domestic visits were made nationwide, up 144.6 percent year-on-year on a comparable basis, returning to 94.5 percent of the same period before the epidemic.

In the same period, China's domestic tourism revenue witnessed a 228.9 percent year-on-year increase to 27.19 billion yuan ($4.14 billion), returning to 56.7 percent of the same period before the epidemic.

A total of 144.5 million passenger trips were expected to be made from April 3 to 5, up 142.4 percent year-on-year according to the Ministry of Transport.

From April 3 to 4, the transaction volume of some large-scale tourism service platforms increased more than 1.6 times year-on-year, and the value of transactions more than doubled year-on-year, according to the NetsUnion Clearing Corporation, as reported by People's Daily.

In the same period, high-quality self-driving tours were favored by consumers, and the car rental market was active, with the number of transactions on some car rental platforms up more than 1.5 times year-on-year and the transaction value increasing by more than 80 percent.