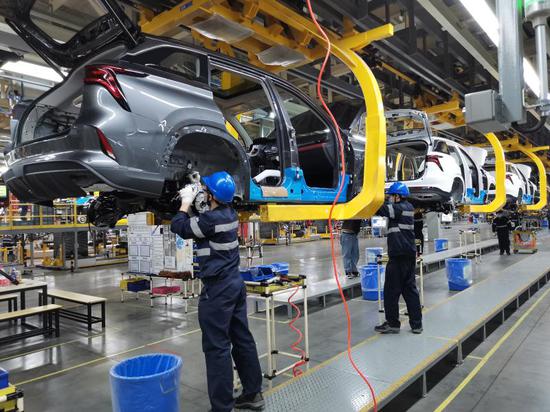 Moving back and forth on an automobile assembly line, Zhang Tianshun was conducting function tests for vehicles before they roll off the production line.

"My job is to check the functionality of seven parts of the car, including four windows, front and rear wipers and the sunroof. It takes two minutes to test a car for my part, and I need to handle about 200 cars per day. It's even busier than before the holiday," said the young man.

It was the first time for Zhang to spend the Spring Festival, or China's Lunar New Year, away from his hometown of Zhumadian City, central China's Henan Province. The 19-year-old works at Hefei Changan Automobile Co., Ltd. in east China's Anhui Province.

Zhang received a combined subsidy of nearly 3,000 yuan (about 465 U.S. dollars) from Hefei City and the company for not leaving during the holiday.

To prevent the sporadic resurgence of COVID-19, China encouraged people to stay put over the holiday this year, which lasted from Feb. 11 to 17.

The car plant resumed production on Feb. 14, after a three-day break, when most people were still celebrating the holiday. More than 1,700 employees, or 85 percent of its staff, clocked in on the first day of work, including over 800 migrant workers who stayed during the holiday.

The manufacturing capacity has returned to the pre-holiday level, with 600 to 700 vehicles rolling off the production line per day, according to the company.

"Another production line resumed operation on Feb. 17, whose capacity is around 300 units a day. Cars coming from this assembly line will be exported to Saudi Arabia, Chile and Brazil," said Xue Wen, an engineer with the company.

Factories across China are traditionally shut down for a couple of weeks after the Chinese Spring Festival holiday. Thanks to the stay-put measure, many enterprises were able to continue holiday production or resume production quickly after the holiday break. 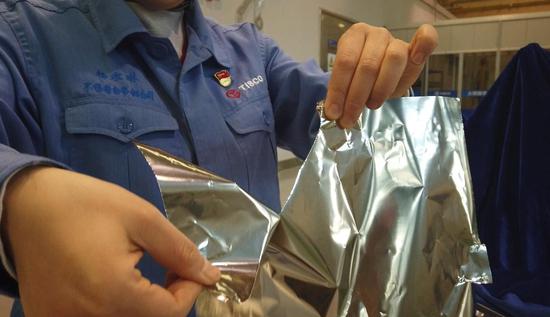 During this Spring Festival, the company received a large order from abroad, greatly boosting the morale of employees, said Qu Zhanyou, director of the company's sales department.

In the workshop of LONGi Solar Technology Co., Ltd. in northwest China's Shaanxi Province, over 200 skilled workers were busy manufacturing solar photovoltaic modules after the holiday to complete their orders on time. Solar modules of nearly 2 square meters were churned out after a dozen of steps including cutting, welding and pressing.

"The output is expected to reach 120,000 modules in February, up by about 50 percent compared with the same period of last year," said Xie Shundong, general manager of the company's Xi'an module plant.

Apart from boisterous producing activities, construction of new projects continued or started during the holiday across the country, injecting new impetus to China's economy.

On Feb. 18, the first workday after the holiday, Anhui announced that a total of 272 projects started construction in the province, with a total investment of over 133 billion yuan, of which 45.3 billion yuan is expected to be implemented this year, according to the provincial development and reform commission.

The bustling construction scene can also be seen at the High-tech Zone of Xi'an, capital of Shaanxi Province, where manufacturers and engineers were busy moving in and installing the equipment to make final preparations for a new Samsung semiconductor memory chip production line. 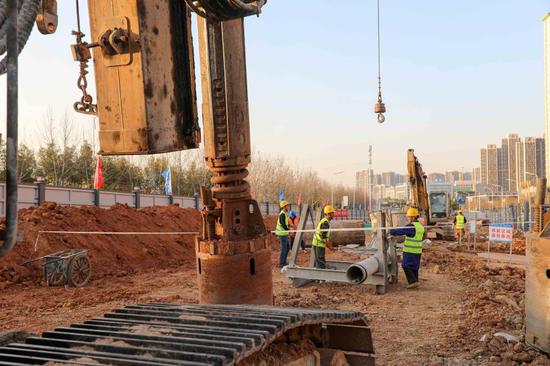 Employees work at the construction site of the first phase of the subway Line 8 in Hefei, east China's Anhui Province, Feb. 21, 2021. (Xinhua/Cao Li)

"More than 1,000 equipment manufacturers and engineers are adjusting equipment on site every day to prepare for the operation," said Sang Hyun Yi, vice president of Samsung China Semiconductor Co., Ltd.

With the help of the Chinese government, Samsung's memory chip project has withstood the test of the epidemic, achieving an output value of 73.6 billion yuan in 2020, an increase of 43 percent from 2019.

During the epidemic, in order to ensure the smooth construction of the second phase of Samsung's memory chip project, Shaanxi Province specially opened up a "green channel" for international chartered flights to receive more than 3,000 equipment installation engineers for Samsung.

Since the beginning of this year, the first phase of the project has been operating smoothly. The second stage of the second phase is advancing steadily, which will come into mass production within the year. At present, all Chinese employees and foreign technical personnel have returned to their posts, Yi said.