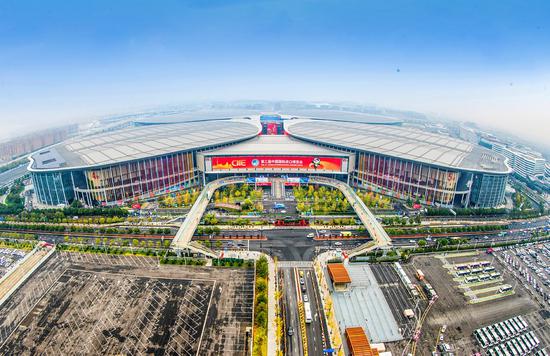 As the CIIE was unveiled last week, the minister delivered a speech through video link to mark the opening of the 300-square-meter Danish pavilion, and witnessed the live-streamed signing in Shanghai of a memorandum of understanding (MOU) between the Danish government, represented by Danish Ambassador to China Thomas Ostrup Moller, and the Chinese e-commerce platform Pinduoduo.

The MOU will see the creation of an online Danish Pavilion to promote quality Danish food brands including Danish Crown, Danisa, and Arla Foods throughout China.

"I'm very happy to participate at the opening of the Danish pavilion in the (China) International Import Expo in Shanghai. The Expo is one of the most important for Danish companies exporting to China," Jensen told Xinhua in an interview at the headquarters of Confederation of Danish Industry in central Copenhagen.

Economists and officials here believed that the growth of China's middle class and their demand for quality products ranging from furniture, textile, machinery to organic food is a driving force for more Danish exports to China, making CIIE a showcase of utmost importance for Danish businesses.

"Danish food production is known worldwide for its high food safety standards as well as its organic products. Danish companies look forward to presenting their unique products and solutions to Chinese visitors at the CIIE," said the minister.

Danish exports of meat products to China have been increasing over the last few years, providing the catalyst for a total of 23 Danish enterprises to become part of the largest delegation of Danish businesses at the third CIIE in a year that also witnesses the 70th anniversary of the establishment of diplomatic relations between China and Denmark.

"I'm very happy to see that there are growing exports from Denmark to China and a great trade relation between our two countries. And I foresee that it will get even stronger in the coming years," said Jensen.

While food producers and ecological farming are the main force in the Danish pavilion at CIIE, pharmaceutical companies, creative toy-maker LEGO and the world's largest container company Maersk have also been present, drawn by the growth of the Chinese market.

"With the great participation of Danish companies and interests from Chinese counterparts, I think this Expo underlines that the Danish-Chinese cooperation is of utmost importance and I look forward to furthering the strong ties in the future," the minister added.