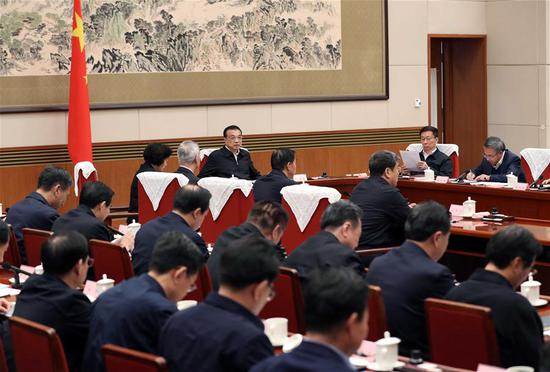 Chinese Premier Li Keqiang, also a member of the Standing Committee of the Political Bureau of the Communist Party of China (CPC) Central Committee, presides over a meeting on making the 14th Five-Year Plan (2021-2025) in Beijing, capital of China, Nov. 25, 2019. (Xinhua/Liu Weibing)

Chinese Premier Li Keqiang stressed quality in making the 14th Five-Year Plan (2021-2025) on Monday while chairing a meeting on the new plan.

China has deepened reform in all areas and promoted wider opening up since the implementation of the 13th Five-Year Plan and fulfilled the goals listed in the plan on schedule, he said.

Following the principle of pursuing progress while ensuring stability, all regions and departments have deepened the all-round reform, taken the initiative to further open up, responded to risks and challenges from home and abroad, and maintained medium-high economic growth within a reasonable range, he said.

While the external environment is likely to be more complex with uncertainties and challenges, China is in a critical period to change its growth model, improve its economic structure, and foster new drivers of growth, he said.

To ensure quality in making the plan, the country should study the opportunities and challenges, give top priority to development, and base its efforts on basic national conditions and stage of development, Li said.

The premier stressed several principles of making the new plan, including to keep the economy running within a reasonable range, to promote high-quality development, to emphasize the vision of people-centered development, and to highlight the role of reform and innovation in tackling difficulties.

Li stressed the importance to plan the key pillars for economic and social development during the 14th Five-Year Plan period.

A number of major policies should be introduced to promote economic development, enhance the well-being of the people and guard against risks, he said.

A batch of major reform and opening-up initiatives should be launched to enhance the endogenous engines for growth and stimulate market vitality, he said.