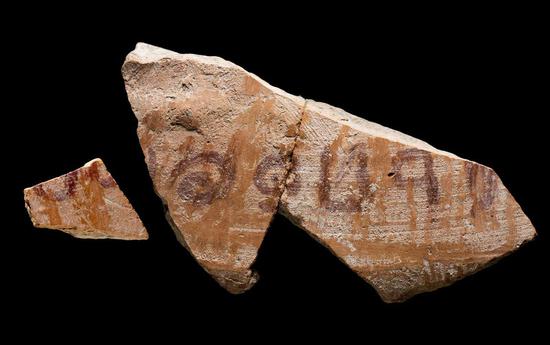 Photo shows the 3,100-year-old biblical inscription found at the archaeological site Khirbet ar-Ra'i near the modern city of Kiryat Gat in southern Israel. (Photo by the Israel Antiquities Authority)

Israeli and Australian archaeologists discovered a pottery jug with a rare biblical inscription in southern Israel, which dates back to 3,100 years ago, the Israel Antiquities Authority (IAA) said on Monday.

The inscription was written in ink on the pottery jug, in a Canaanite alphabetic script. It bears the name of Jerubbaal, who was a biblical military leader, judge and prophet.

This small personal pottery vessel holds about one liter and may well have contained a precious liquid such as oil, perfume or medicine, the IAA said.

The jug was discovered at the archaeological site Khirbet ar-Ra'i near the modern city of Kiryat Gat, in excavations conducted by the Hebrew University of Jerusalem, the IAA, and Macquarie University in Sydney.