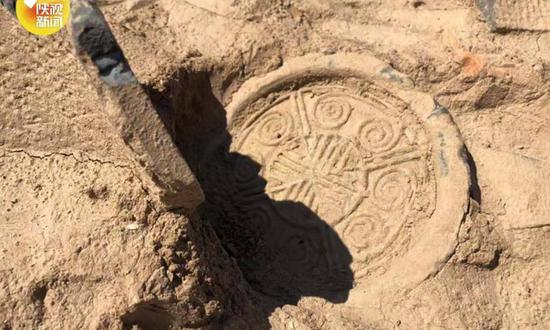 A building unearthed in ruins discovered 18 kilometers north of Xi'an, Northwest China's Shaanxi Province, may have been the place Qin Shi Huang, the founder of the Qin Dynasty (221 BC-206 BC) and China's first emperor, held court.

The Qin Xianyang City site contains a large number of palace office ruins. Among them, a structure labeled as “ruin number 6” at the core of the site has been examined by archeologists, who have determined that it was possibly the location where Qin Shi Huang oversaw his empire's administrative matters.

Based on recreations of the site, it is estimated that the roof area was 1,000 square meters in size.

“What has been evacuated this time is of large scale and high level. It is located at a spot that was most likely a spot used for administrative purposes. You could say that it was probably considered to be one of the most important places in the entire site,” said Zhang Ying, an associate professor of Warring States Period (475BC-221BC) and Qin Dynasty archeology at Shaanxi Normal University, told the Global Times on Tuesday.

“Government administrative locations often had ritual or symbolic meaning, and may not have always been for everyday work. Imagine, if the space for work was too big, people would have to talk to each other with large distances between them. So it wouldn’t be a good environment for communication, would it? Take the Hall of Supreme Harmony [in Beijing’s Forbidden City] as an example, it symbolizes the power of the emperor and the majesty of the country,” said Xu Yitao, a professor specializing in architectural archaeology at the School of Archaeology and Museology at Peking University, told the Global Times.

“It is still uncertain whether or not the hall was definitely what we are now assuming, an administrative place, because no other strong evidence has been found yet,” Zhang emphasized.

In addition to the discovery of Qin Shi Huang's “office,” further investigation has revealed that the other areas at the site were divided into three districts – Gong, Shu and Guo – by artificial trenches and the natural environment.

There were handicraft and management departments in the west and north of the Gong district, within which remains such as bone wares, metal objects, coins and stones have been found.

The Guo district was around 9.6 million square meters – almost double the size of the Gong district. The remains of an ancient semi-cavernous house, a cellar storage pit and water well have been discovered in this district.

An underground water system running some nine kilometers from east to west ran along the border of the Gong and Guo districts and was an important source of water for the site.

The Qin Xianyang City site dates back to between the late Warring States Period and the Qin Dynasty. A total of 15,168 square meters of the site has been excavated so far.

In 2010, the Qin Xianyang City site listed as a National Archaeological Site Park, a title given to archaeological sites of significant value to scientific research, education and tourism, and which is exemplar of national public spaces of historical and cultural significance.