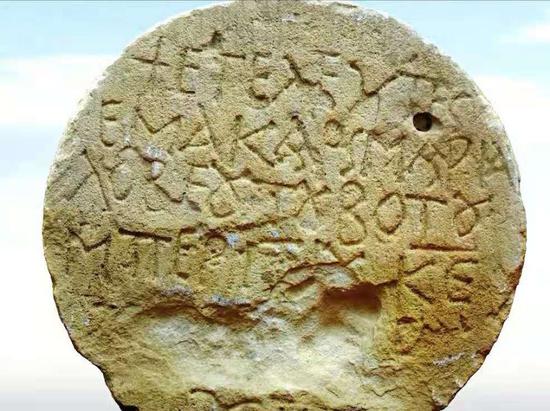 Picture provided by Israel Antiquities Authority shows the stone bearing an inscription in Greek from about 1,400 years ago.

A stone bearing an inscription in Greek from about 1,400 years ago was discovered in southern Israel, the Israel Antiquities Authority (IAA) said on Wednesday.

The stone, dating back to the end of the Byzantine period, was discovered in the confines of the Nitzana National Park in the Negev Desert.

The flat and round stone, 25 cm in diameter, was used as a tombstone in one of the cemeteries surrounding the ancient Nabataean city of Nitzana.

Nitzana was founded in as early as the third century BC as a road station on a major trade route and the place was inhabited intermittently for about 1,300 years.

During the fifth and sixth centuries, Nitzana was a center for the villages in the vicinity.