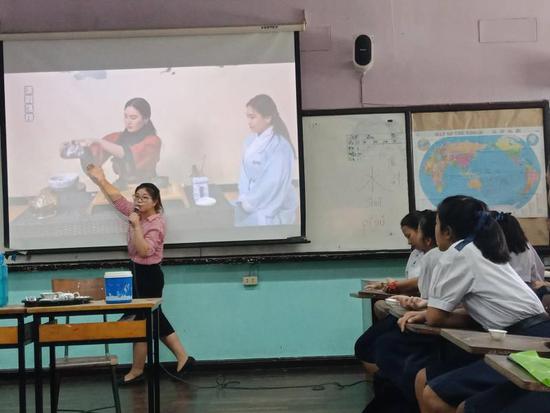 Of late, there have been heated debates on the use of unified textbooks in some schools in ethnic minority autonomous regions or autonomous counties, which some foreign media outlets have used as a pretext to make irresponsible remarks on China's education system.

The Law on Regional National Autonomy and the Education Law also stipulate that schools and other educational institutions in autonomous regions and autonomous counties where students of ethnic minorities are in majority should have the provision for conducting classes in two languages－the national common language and the language of ethnic group in majority in the area.

The Inner Mongolia autonomous region is the first ethnic minority region to be established in China and also the first to impart education in both the national common language, or Putonghua, and the ethnic minority language, Mongolian. By 2019, there were 140 Mongolian schools, including junior high schools, senior high schools and mixed schools, in Inner Mongolia's cities, offering education to 330,000 students from ethic minority groups, 290,000 of whom were ethnic Mongolians.

By receiving nine-year compulsory education－even higher education－members of ethnic minority groups in pastoral areas of Inner Mongolia have not only mastered their own languages but also become proficient in Putonghua, and thus have more opportunities to develop their career.

Inner Mongolia's stability, prosperity and peaceful social order and its development as a "model autonomous region" are inseparable from a number of "bilingual talents" that have come up in the past years. At the end of 2001, of the 26,900 Mongolian students, 900 were undergraduate students in higher education institutions in Inner Mongolia－the figures had increased to 110,000 and 6,000 respectively at the end of 2019.

After graduation, ethnic Mongolian students either continue to study to earn a master's degree or a doctorate, or return home to work or start their own business. And thanks to the modern scientific and cultural knowledge they acquire, they become a major force of change in ethnic minority areas, promote ethnic unity and progress, and help develop socialism with Chinese characteristics.

In order to meet the high-quality development demand of socialism with Chinese characteristics in the new era, promote high-quality education and cultivate more ethnic minority talents who are proficient in both Putonghua and an ethnic minority language (or languages), the State-compiled Chinese textbooks will be used in schools to teach languages in Inner Mongolia from the fall of 2020.

The move is aimed at helping primary and secondary school students from ethnic minority groups and Han students to stand at the same starting line when it comes to learning Putonghua so they could, in the future, promote national development.

According to the Constitution, and other laws, Chinese citizens are obliged to learn and use the national common language. To coordinate the education of ethnic minority students in accordance with the Constitution and promote the unified compilation of teaching materials to improve the bilingual education environment are essential for the development of China's socialist education cause that should invite no controversy or reproach.

The author is researcher at the institute for Belt and Road Initiative Studies, Inner Mongolia Academy of Social Sciences.