During a tour to the Juyong Pass of the Great Wall organized by the Beijing Organizing Committee for the 2022 Olympic and Paralympic Winter Games (BOCWOG), about 40 registered journalists witnessed the grand view from the Great Wall, one of the symbols of Chinese culture.

"There are many Chinese cultures in such a big country compared to where we're from in Europe. It's a very rich culture. It's very diverse. It's something to discover for everyone in the world," said a Winter Olympics journalist from Europe after visiting the magnificent structure.

Many other journalists felt the same way.

"That's fun for me, and I really enjoy it," said Ute Maag, a freelance journalist from Germany, "I have also covered the Olympics of 2008, but I didn't have enough time to come here. So it's great to experience it now.”

Croatia's HRT journalist Martina Validžić said she grew interested in traditional Chinese medicine and Tai Chi back at the Main Media Center for the Beijing 2022 Winter Olympics. The tour of the Great Wall also impressed her.

"I'm really excited to be a part of this tour," she said.

Apart from the tour of the Great Wall, foreign journalists were also invited to taste Chinese food.

Adam Wood, a journalist from USA Today, barely knew Chinese New Year before. But after he came to Beijing, he knew that this year is the Year of the Tiger and there are 12 zodiacs in Chinese culture, according to China Daily.

Brazilian journalist Arlene Pravenik said the Beijing 2022 Winter Olympics gave the media an opportunity to learn more about traditional Chinese festivals and culture. "We can't visit many places due to COVID-19, but we can have the chance to better understand Chinese culture here in Beijing," she told China Daily.

Ryota Hasebe, a journalist from Japan’s Jiji Press, told China Daily that he never knew how Chinese people celebrate the Spring Festival before he came to Beijing. “This is the first time I’ve ever celebrated the Spring Festival,” he added. He also said "Happy Chinese New Year" in fluent Chinese. 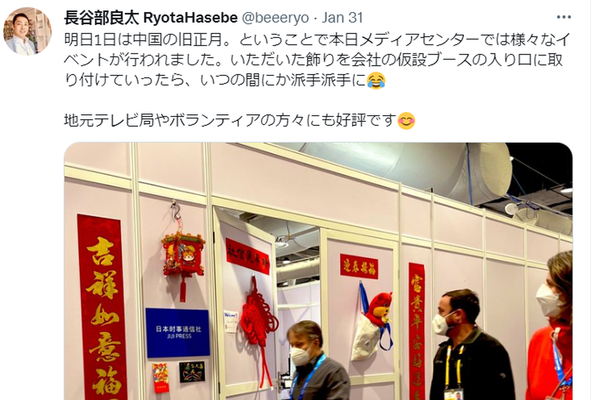 Japanese journalist Ryota Hasebe tweeted in celebration of the Chinese New Year on Jan. 31st. (Photo from a screenshot on Twitter)