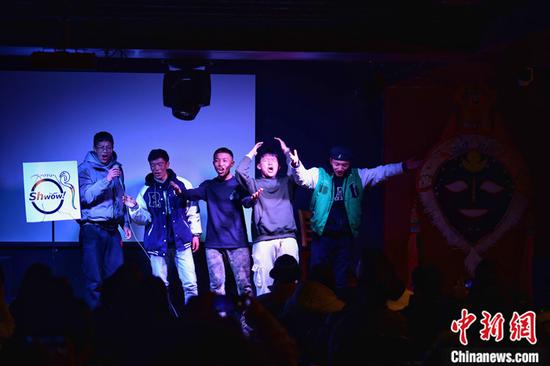 A group of college students from Tibet Autonomous Region performs a talk show in their vernacular tongue at a local restaurant in Lhasa on the evening of January 22, 2022. (Photo/China News Service)

(ECNS) -- A group of college students from Tibet Autonomous Region performed a talk show in their vernacular tongue at a local restaurant in Lhasa on Saturday evening.

This is the first Tibetan talk show team with members born after 2000.

The talk show began at 7 p.m. Saturday evening, with topics related to their studies, school life, love stories, interesting things in Tibet, etc. The audience burst into laughter during the show. The performance was supposed to end at 8:30 p.m., but in fact ended an hour later, with the performers accepting Hada and flowers from the audience.

"There is no such talk show in Tibet, while there are many young Tibetans that need to express themselves," said one of the spectators, a freshman from Jinan University in Guangzhou, Guangdong Province.

Due to the COVID-19 pandemic, the show only provided 120 tickets, each at 69 yuan (about $10.9), said the talk show manager. "The tickets were sold out within a few hours on the first day," he added.

The young man said he watched a talk show for the first time as a freshman, then decided to make his own in Tibet. Since then, he began paying attention to stage decorations, lighting, etc.

Tibet is a place filled with humor and optimism, said the young man. "Tibetan talk shows have much potential," he added.