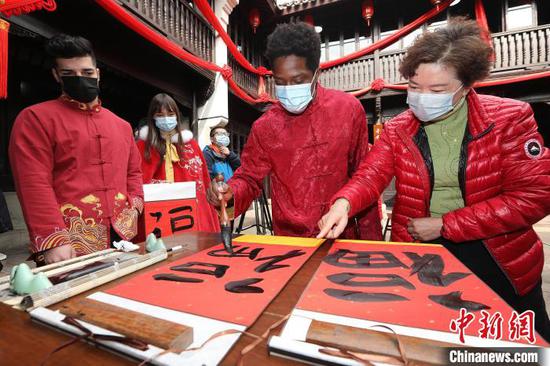 Loko de Mais, a Canadian who has been living in China for 12 years, can speak fluent Mandarin as well as the Ningbo dialect. He tried sugar painting on the spot and drew a crab.

"I didn't know about Chinese Spring Festival at all when I first came to Ningbo, but now I know it is an auspicious festival for family reunion. During this festival, families will enjoy reunion dinners and have a chat. It's very happy," said Loko.

Ryan Mann, another young man from the U.S., said what impresses him the most is that Chinese are all very warm-hearted. "I like China very much and my Chinese friends are very kind and friendly. It is so much fun to enjoy Chinese food during the festival," he said.

Young people were attracted by Ningbo cuisine after experiencing Spring Festival customs. They sit together to taste food like fish, crabs and wax gourd cooked in local ways and celebrated the upcoming Chinese New Year.