(ECNS) -- A Chinese photographer has won first place in the Mammal category of the 2021 National Wildlife Photo Contest, according to the list of winners released Saturday.

Li's work, called "Footprint," stands out among more than 40 thousand photos. In Li’s photo, Tibetan antelopes approach a dune to hunt for food in China’s harsh, high-elevation Kumukuli Desert, while weaving braids of footprints in the snow. 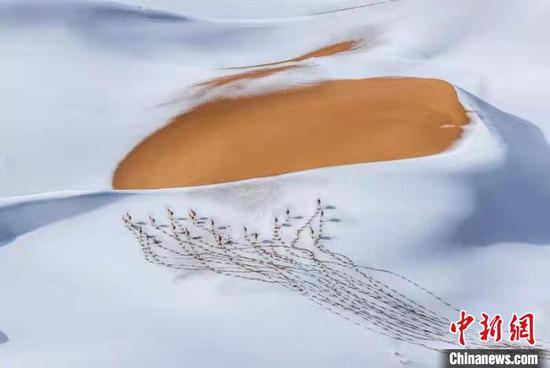 This is the second time for Li to have his work shown to the world after his previous work was selected for the 28th National Photography Art Exhibition.

For years, photographers from Qinghai Province have shown the world photos of ecological preservation, winning titles in both domestic and international photo contests.

The 2021 National Wildlife Photo Contest, sponsored and managed by the National Wildlife Federation of the United States, is of great significance in photography. It covers nine categories including birds, mammals, baby animals, landscapes and plants, mobile, people in nature, other wildlife, and young nature photographers.