(W.E. Talk) Kishore Mahbubani: Do we need a winner in the U.S.-China relationship?

(ECNS)-- The U.S. policy toward China has caused serious difficulties in China-U.S. relations. In this context, Kishore Mahbubani, distinguished fellow of the Institute of Asian Studies at the National University of Singapore and a former permanent representative of Singapore to the UN, has published his book Has China Won? The Chinese Challenge to American Primacy.

Growing up and working in Singapore, Mahbubani has been deeply influenced by Asian traditions and culture while his working experience in Washington and New York for more than a decade fully exposed him to the culture and politics of the West, particularly the U.S..

In the latest "W.E. Talk", he took the interview by Wang Enbo, reporter of the Economic Department of the China News Service. He holds that there can be a win-win outcome in the U.S.-China relationship and different historical experiences need not prevent mutual understanding between the U.S. and China. The rise or rejuvenation of the Chinese civilization is not a threat to Western civilization. By strengthening existing global frameworks and multilateral institutions, we can arrive at a common set of values to deal with global challenges.

Here’s the excerpt of the dialogue: 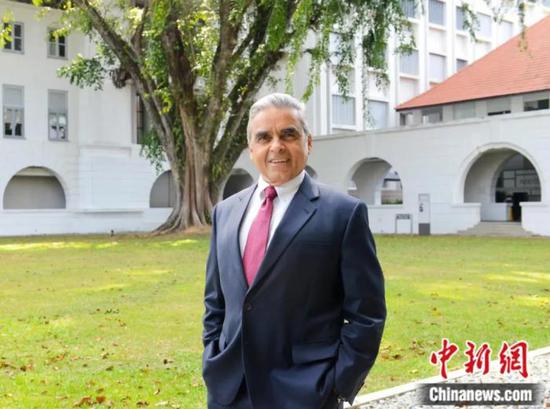 Wang Enbo: Your book Has China Won? Has a very provocative title. In your opinion, is there a need for a winner in the U.S.-China relationship?

Wang Enbo: When China and the U.S. look at each other from across the ocean, they seem to have different understandings of each other and sometimes disagree. What are the reasons for this discrepancy? Is there a fundamental lack of empathy between the two sides?

Kishore Mahbubani: The lack of mutual understanding between U.S. and China is understandable. The different historical experiences of U.S. and China over the past 200 years have conditioned their different perspectives. The U.S. has been exceptionally successful over the past 150 years. By contrast, China experienced a century of humiliation from roughly 1842 to 1949. Hence, China has been very focused on achieving its goal of "The Great Rejuvenation". Given these historical experiences, the U.S. is deeply troubled by the prospect given that it might become the No.2 economy in the world in the next 10-20 years. Hence, many Americans believe the U.S. should try to stop China's return. By contrast, China’s main goal is to overcome the century of humiliation, improve the living standards of its people, and ensure that China is treated with respect by the rest of the world.

In theory, these different historical experiences need not prevent mutual understanding between the U.S. and China. In practice, there has been massive misunderstanding, as I documented in my book. One example of major misunderstanding of China in the U.S. is demonstrated in the American belief that the Chinese people are unhappy with their current condition.

Fortunately, an American psychologist at Stanford University, Jean Fan, has documented how this perception is completely incorrect. As she says, "China is changing in a deep and visceral way, and it is changing fast, in a way that is almost incomprehensible without seeing it in person. In contrast to America's stagnation, China's culture, self-concept, and morale are being transformed at a rapid pace-mostly for the better."

Wang Enbo: You say that major geopolitical competition between China and the U.S. in the future is "inevitable and avoidable". How should we understand this contradiction?

Kishore Mahbubani: The geopolitical competition between China and the U.S. is inevitable but avoidable. It is inevitable because it is driven by deep structural forces. For most of the last 2000 years, from the year 1 to 1820, the two largest economies were always those of China and India. Only in the last two hundred years did Europe, followed by America, surpass them and come to dominate world history. The return of China and India is simply bringing this aberration to an end, but the United States is refusing to accept this reality.

Wang Enbo: In recent speech at the United Nations General Assembly, the U.S. President Joe Biden said that the U.S. "does not seek a new Cold War", but even the Western media are skeptical about this. How do you evaluate Biden’s statement? Will there be a "new Cold War" between China and the U.S.?

Kishore Mahbubani: It was a very positive development for President Biden to say that the U.S. does not seek a new cold war with China. Nonetheless, many thoughtful observers of the U.S. have pointed out that the Biden Administration has not reversed many of the negative policies of the Trump Administration. Two thoughtful observers of the U.S. have made this observation too. Fareed Zakaria of the Washington Post says that "Biden’s foreign policy is a faithful continuation of Donald Trump's and a repudiation of Barack Obama's." Edward Luce of the FT has pointed out that "there is little of substance on China to distinguish Biden from Trump." It would therefore be a positive development for the Biden Administration to lift some of the negative measures of the trump administration.

Wang Enbo: In understanding the Chinese civilization, some Western politicians and think tanks often make black or white judgments based on cultural biases. For example, they see the great rejuvenation of the Chinese nation as the rise of a new empire, and the Chinese wisdom that "the Pacific Ocean is big enough to accommodate two great powers" as a rivalry with the U.S.. In your opinion, is Chinese civilization a threat to Western civilization?

Many Americans believe that Chinese civilization, like Western civilization, is inherently militaristic and will desire to conquer and subjugate other territories as it becomes more powerful. This is another misunderstanding. Indeed, as I documented in the chapter "Is China Expansionist?", it is a marvel that in the long history of Chinese civilization, it did not conquer geographically close territories like Australia, which was physically occupied and conquered by far more distant British forces. This was even when China had a strong and powerful navy. At the start of the 15th century, nearly a hundred years before Christopher Columbus tried to find a route to the so-called Spice Islands, China sent out seven naval expeditions, under the remarkable leadership of Admiral Zheng He, a legendary Chinese figure. He traveled as far as Africa on ships that were far larger in size than the Portuguese or Spanish vessels. But remarkably, he did not conquer or occupy any over-seas or distant territories. This reflects this great wisdom of ancient Chinese thinkers like Sun Tzu, who said that "To win one hundred victories is not the acme of skill. To subdue the enemy without fighting is the acme of skill."

Wang Enbo: The Covid-19 pandemic, ecological crises, and the polarization between the rich and the poor are common to all human beings and are testing the resilience of civilizations. How can we establish a common set of values to deal with these global challenges?

Kishore Mahbubani: In the past, when the 7.8 billion people of the world lived in 193 separate countries, it was as though they were living on 193 separate boats. Now, the world has shrunk. The 7.8 billion people live in 193 separate cabins on the same boat. If one cabin of the boat catches fire, it impacts the entire boat. Covid-19 and climate change have demonstrated this concept well. The pandemic could not be restricted to one country or region. Rather, it became a global medical emergency in a matter of months. Similarly, the solutions to Covid-19 and future such pandemics, as well as to climate change, also cannot be restricted to individual countries. The solution to global challenges must be global solutions. To arrive at such solutions, we need to strengthen global multilateral institutions, such as the United Nations and the World Health Organization. By strengthening existing global frameworks and by strengthening multilateral institutions, we can arrive at a common set of values to deal with these global challenges.