(ECNS) -- A photography exhibition opened at the Palace Museum in Beijing on Monday, to showcase the charm of this architectural wonder through the perspective of foreign diplomats.

The photo exhibition “As We Encounter in Light: The Palace Museum Through Diplomats' Eyes” displayed 109 photos from 29 diplomats of 19 countries and two international organizations.

The diplomats' first impressions of the museum, details of the buildings and vivid scenes during their visits were spotlighted in three units of the photo exhibition. 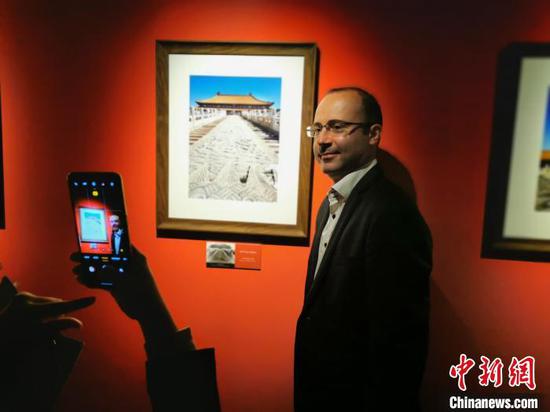 A foreign diplomat next to his work. (Photo: China News Service/Ying Ni)

Their first impressions of the museum, details of the buildings and vivid scenes during the diplomats' visits were spotlighted in three sections of the photo exhibition.

The photography of the museum helped the diplomats develop a thoughtful exploration into the ancient architectural complex, breaking through national boundaries of time and space, and colliding with a new vitality.

The Palace Museum, also known as the Forbidden City, is the world's largest remaining architectural compound made of wood and also generally represents the pinnacle of ancient Chinese architecture.