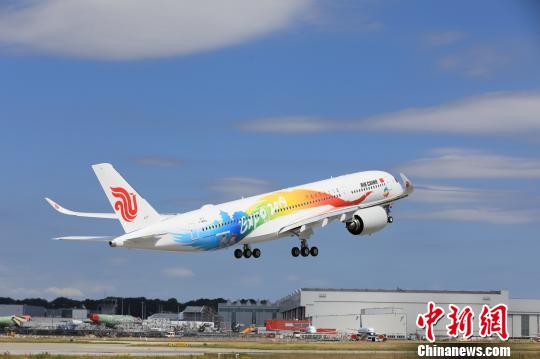 (ECNS) - Air China, the country's flag carrier, has launched a colorful jetliner for its Beijing-London route to celebrate the 2019 Beijing International Horticultural Exhibition.

The “Colorful Beijing Expo” painted Airbus A350-900 embarked on its maiden flight on Sunday after a grand ceremony at Terminal 3 of Beijing’s Capital International Airport.

Ma Chongxian, vice president of Air China, said the airline has always adhered to the concept of "green operation and sustainable development" and made continuous efforts in energy conservation, efforts that match well with the exhibition’s theme - "live green, live better."

As the global partner of the Beijing International Horticultural Exhibition and sole sponsor in the aviation category, Air China has color sprayed three aircraft to promote the event which fly on route from Beijing to Chongqing and Kunming.

Underway since April 29, the 162-day expo at the foot of the Great Wall in northwest Beijing's Yanqing District is poised to impress an expected 16 million visitors from home and abroad with a huge collection of plants, flowers and eye-catching pavilions as well as ideas for green development.