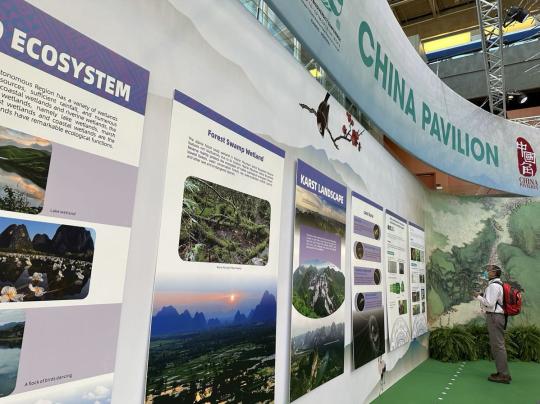 An attendee of COP 15 reads the information displayed at the China Pavilion in Montréal, Canada, on Wednesday. (Liu Yinmeng / China Daily)

China's achievements and practices on biodiversity conservation are being shared with members and participants of the 15th Conference of the Parties (COP15) through the launch of the China Pavilion in Montreal.

With the theme of "Ecological Civilization: Building a shared future for all life on earth", the launch of the pavilion attracted many visitors during the global meeting of the United Nations Convention on Biological Diversity (CBD), which aims to adopt the post-2020 Global Biodiversity Framework (GBF), a roadmap to guide action to halt biodiversity loss by 2030 and achieve recovery by 2050.

In his welcoming remarks, Huang Runqiu, president of COP15, and China's minister of ecology and environment, highlighted the results of China's biodiversity conservation over the past 10 years.

According to Huang, China has improved institutional mechanisms and policies to promote the mainstreaming of biodiversity conservation. In the past decade, more than 20 laws and regulations related to biodiversity, such as the Forest Law and the Wildlife Protection Law, have been formulated and revised, and the list of wild animals and plants under national protection has been revised.

Meanwhile, China has officially established the first group of national parks since 2021. Unlike foreign national parks, which are mostly uninhabited lands at the beginning of their establishment, China has a large population, and most of the nature reserves have population distribution. It is necessary to properly handle the relationship between humans and nature, protection and development.

But China was able to do it. For example, in Hainan province, the authenticity and integrity of the ecosystem were promoted through the implementation of plantation withdrawal and transformation, vegetation restoration, and aerial corridor construction, which effectively solved the problem of habitat fragmentation for gibbons.

The population has increased from two groups of around eight to five groups of 36 individuals.

The COP15 phase one held in China in October 2021 adopted the Kunming Declaration, laying a foundation for the second phase of the conference, and China is once again at the helm during the second part of COP15 in Montreal.

China also agreed to pay for ministers from the lowest-income countries and some small island states to travel to Montreal to participate in the meeting.

Elizabeth Maruma Mrema, executive secretary of the UN CBD, who attended the event, gave high praise to China's achievements and efforts on biodiversity conservation, especially through the COVID-19 pandemic, China found a way to not only hold the first part of COP last year, but also to mobilize the commitment of the world through the Kunming Declaration.

"I want to thank the government of China for their flexibility and continued commitment to advancing our path towards an ambitious post-2020 GBF," Mrema said.

Stephen de Boer, assistant deputy minister of the international affairs branch of Environment and Climate Change Canada, said Canada and China have a long history of working together on environmental issues.

"I am proud of the accomplishments our two countries have made together on the environment. The outcome of COP15 will be only the first of much collaboration we work towards achieving the theme of this event, building a clean and beautiful world together," he said at the China Pavilion.

He noted that the collaboration between Canada and China on part two of COP15 is only the most recent success. Both are making good progress toward shared goals of halting and reversing nature loss.

"Our hope is to build on the excellent foundation established at the COP15 held in Kunming. Canada is committed to supporting the Chinese presidency and ensuring the COP15 brings positive outcomes for nature, including adoption of an ambitious GBF," de Boer said.

While applauding China's achievements and contributions on conservation, Marco Lambertini, director general of World Wildlife Fund (WWF) International, said the nature that human beings depend on to survive is still at stake.

One million species face extinction because of humans, he said, and more than 90 percent of fisheries are either over or fully exploited over the last 50 years.

"I am delighted to hear (that) the Chinese government and many other governments are beginning to actually focus on the right condition to unite the world to be safe," he said.

"China is a mega diverse country and home to some of the most stunning species. Effective protection of these national treasures is in itself a substantial contribution to global biodiversity," Lehr spoke virtually to the crowds at China Pavilion.

She believes that China is increasingly at the center of global flows of investment and goods trade, where China channels its investment and how it sources its soft commodities have profound implications for the natural environment.

"In other words, China has a much untapped potential to become a driving force behind a green transformation of global investment and trade," she said.

She said it was encouraging to see that China has taken steps toward environmental sustainability. For example, the concept of ecological civilization not only captures the time-honored belief and harmony between humans and nature, but also underpins many of China's recent policies that help safeguard the natural environment.

China's recent ban on coastal wetlands reclamation will help save its precious coastal ecosystem that provides vital habitats for millions of migratory birds whose journey spans multiple continents, she said.

"China's 14th Five-Year Plan for the first time has articulated its goal of building a green trade system, which can potentially create immense opportunities for sustainable commodities trade," Lehr added.

He spoke highly of China's work in biodiversity protection and climate change response, especially its practical efforts to promote and coordinate all parties in the presidency of COP15.

"I'm willing to do my best to work with China to coordinate all the parties and ensure the success of COP15," Guterres told Huang in a meeting before the opening of COP15.