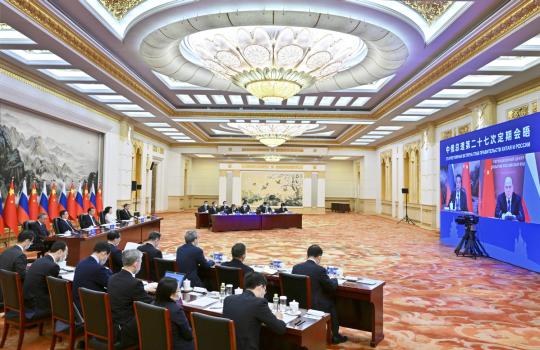 Chinese Premier Li Keqiang has stressed the need for China and Russia to make good use of bilateral cooperation mechanisms, steadily push forward joint projects in key fields and constantly improve the level of trade and economic cooperation.

Li made the remarks on Monday as he co-chaired the 27th regular meeting between Chinese and Russian heads of government with his Russian counterpart Mikhail Mishustin via video link.

Noting that the two countries' economies are highly complementary, Li called on China and Russia to optimize customs clearance processes and jointly maintain stable and smooth industrial and supply chains.

The value of trade between China and Russia in the first 10 months of this year set a record for the period, exceeding $150 billion for the first time. In doing so, it also surpassed the figure recorded for the whole of 2021, according to the General Administration of Customs.

The premier said that China and Russia, as each other's most prominent neighbor and emerging market, have enjoyed a traditional friendship. They have continuously developed bilateral relations based on the principles of non-alliance, non-confrontation, and non-targeting of third parties, he added.

He also called for the deepening of cultural and other communications between the two countries to consolidate public support for their long-standing friendly relations.

Li said the meeting between Chinese President Xi Jinping and Russian President Vladimir Putin in September in Uzbekistan has given a strong boost to bilateral relations.

China is ready to maintain high-level interactions with Russia, strengthen exchanges and cooperation in all fields and deepen the China-Russia comprehensive strategic partnership of coordination, he said.

Mishustin said that the development of the Russia-China relationship has maintained good momentum with bilateral cooperation moving steadily in all directions, even amid a complicated global situation.

Russia stands ready to work with China to strengthen cooperation in key areas such as trade and the economy, deepen people-to-people exchanges, upgrade bilateral cooperation and consolidate the good-neighborly friendship between the two countries, he said.

The Russian prime minister also said that his country is willing to address global challenges with China and promote the formation of a multipolar architecture for international relations.

The annual exchange between the Chinese and Russian heads of government has been held consecutively for 27 years, playing a positive role in advancing practical cooperation in all fields.

In another development, on Thursday and Friday, Premier Li will hold the seventh "1 6" Roundtable in Huangshan, Anhui province, with the heads of major international economic organizations including David Malpass, president of the World Bank Group, and Kristalina Georgieva, managing director of the International Monetary Fund.

Under the theme of "Strengthening Multilateral Cooperation for Global Common Development", the participants will discuss issues including building an open world economy, boosting global economic recovery and growth, and China's commitment to energizing the world economy through deepening reform and opening-up, Foreign Ministry spokeswoman Mao Ning said on Wednesday.