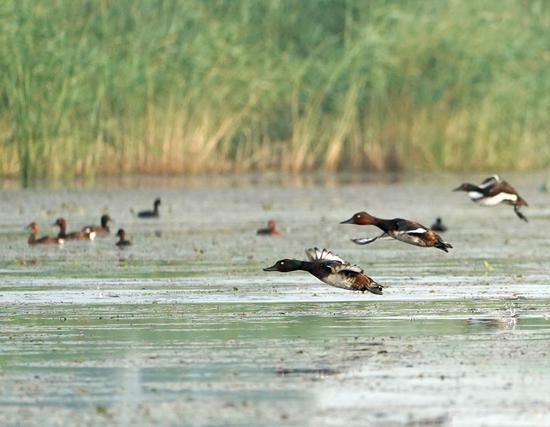 There are now 248 wild bird species in Baiyangdian, an increase of 42 species since the establishment of the Xiong'an New Area in 2017, according to the administrative committee of the area, where Baiyangdian is located.

The environmental protection of Baiyangdian has been reinforced since the Xiong'an New Area was established. Baiyangdian's water quality has improved, and Xiong'an has designated nine bird habitats in the wetland, which is subject to a year-round hunting ban.

Tian Yongchang, deputy director of the natural resources bureau of Anxin County in Xiong'an New Area, said they organized 16 newly hired professional bird habitat inspectors to carry out joint inspections on eight designated routes, together with township staff and volunteers who love and protect birds. During this year's migration season, more than 2,000 local volunteers are participating in the bird protection campaign.

To protect birds from bad weather conditions in winter, Xiong'an New Area has set up a reserve for rare birds to feed over winter in a shallow artificial wetland with a total area of 2,800 mu (about 186.7 hectares) beside Baiyangdian Lake.