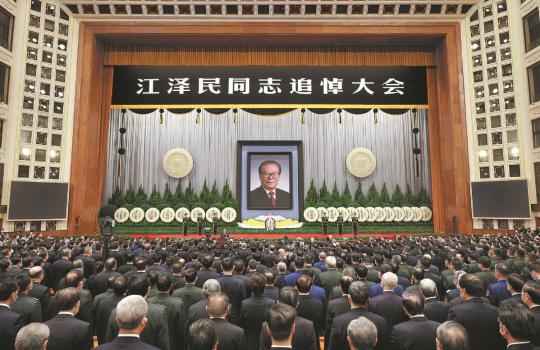 People attending a memorial meeting for Jiang Zemin at the Great Hall of the People in Beijing on Tuesday morning stand in solemn silence as President Xi Jinping delivers the eulogy. (FENG YONGBIN/CHINA DAILY)

President Xi Jinping led the nation in paying tribute to Jiang Zemin on Tuesday as he highlighted the need to carry forward the former leader's legacy, turn sorrow into strength and keep writing new chapters on the path of socialism with Chinese characteristics.

In a eulogy delivered at a memorial meeting at the Great Hall of the People in Beijing, Xi attributed the tremendous achievements of the Party and nation between 1989 and 2002 to the late Chinese leader's eminence and bold vision, the key role he played and his superb political leadership.

"Comrade Jiang Zemin made immortal contributions to the Party and the people and won the wholehearted love of the whole Party, military and people of all ethnic groups and widespread praise from international society," he said.

The nation suspended all public entertainment activities on Tuesday, and all national flags were flown at half-staff.

A three-minute silent tribute was paid at the start of the meeting at 10 am, as people across the nation expressed their grief, while horns and sirens were sounded. The nation's stock and futures trading was also suspended for three minutes in commemoration of Jiang.

This was followed at the memorial meeting by the singing of the national anthem, and Xi then took the rostrum to deliver the eulogy.

He spoke highly of Jiang's glorious life, saying that the former leader led the nation in calmly responding to a host of international emergencies and conquered difficulties and risks in politics and the economy and from nature.

Jiang, in his long revolutionary practice, forged a distinctive revolutionary spirit and style that will always be remembered and will spur the nation forward, Xi said.

He underlined the need to continue integrating the basic tenets of Marxism with China's specific realities and fine traditional culture and keep responding to the questions posed by China, by the world, by the people, and by the times in order to maintain the vigor and vitality of Marxism.

Leadership by the CPC is the fundamental guarantee for the course of the Party and people to move forward in spite of all difficulties, he said, adding that it is important for the Party to carry forward its great founding spirit, remain true to its original aspirations and missions and forge ahead with self-reform.

Xi stressed that socialism with Chinese characteristics is the way to go for China to keep pace with the times and lead the development of the times, and the nation must adhere to this path and move forward the great rejuvenation of the nation with a Chinese path to modernization.

The people are the fundamental strength determining the future of the CPC and the nation, and the Party must adhere to the people-first principle, serve the people wholeheartedly and implement a people-centered development philosophy, Xi said.

He reaffirmed the nation's pledge to hold high the banner of peace, development, cooperation and mutual benefit, promote the common values of all mankind, promote the building of a community with a shared future for mankind and march forward with all progressive forces in the world.

Xi urged the whole Party and all people to maintain their fighting spirit, seize the historic initiative and overcome various difficulties and challenges on the path forward.

"Comrade Jiang Zemin bade farewell to us. His reputation, achievements, thoughts and charisma will always be part of history and engraved in people's hearts, generation after generation," he said.

Among the close to 5,000 people in attendance at the memorial were representatives from all walks of life, including Jiang's relatives and friends.

Justin Yifu Lin, a former World Bank chief economist and professor at Peking University, was among the mourners at the event. He said that a key part of Jiang's legacy was the establishment of a socialist market economy in China and leading China toward greater opening-up.

In spite of various obstacles, Jiang guided China into the global market and laid the foundation for its rise to become the world's second-largest economy, he said.