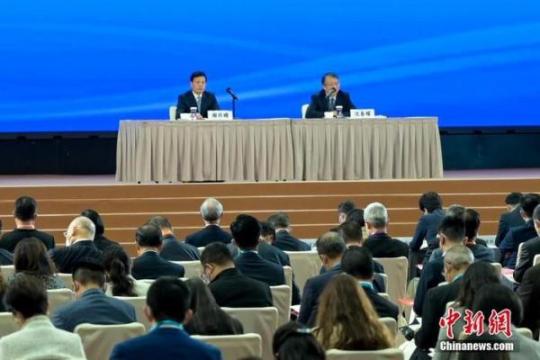 Representatives from Hong Kong and Macao gathered to discuss the 20th National Congress of the Communist Party of China as a central government delegation arrived in the two special administrative regions to help deepen understanding of the congress among local communities. (PHOTO/CHINA NEWS SERVICE)

Representatives from Hong Kong and Macao gathered to discuss the 20th National Congress of the Communist Party of China as a central government delegation arrived in the two special administrative regions to help deepen understanding of the congress among local communities.

The high-level central government delegation, on tour to the two regions from Thursday, was invited to speak at two seminars in Hong Kong on Saturday. More than 1,100 Hong Kong SAR government officials, politicians, business leaders and representatives from various sectors attended the events.

But the principle needs to be continuously tweaked to retain vitality, Shen added.

Xie said it is foreseeable that there will be more difficulties ahead during the path to modernization, including increasing pressure from Western countries.

As a result, Xie stressed that Hong Kong must foster a fighting spirit to tackle the challenges on the road ahead.

Hong Kong Chief Executive John Lee Ka-chiu thanked the central government for sending the delegation to help the city better understand the Party congress, which is imperative for the steady and sustained implementation of "one country, two systems".

Since the Party congress provides action guidelines on the development of the Hong Kong SAR and the steady implementation of the "one country, two systems" principle, Lee hoped every participant would deepen their understanding of the essence of the congress, convey the significance of the congress to society and put what they have learned into action at work.

The high-level delegation also held a similar study session on Friday evening, sharing the messages of the Party congress with over 500 representatives from HKSAR-based central government organizations, Chinese mainland-funded enterprises and branches of national media outlets.

Before visiting Hong Kong, the central government delegation participated in a two-day tour of the Macao Special Administrative Region on Thursday and Friday, holding three seminars to boost understanding of the Party congress.