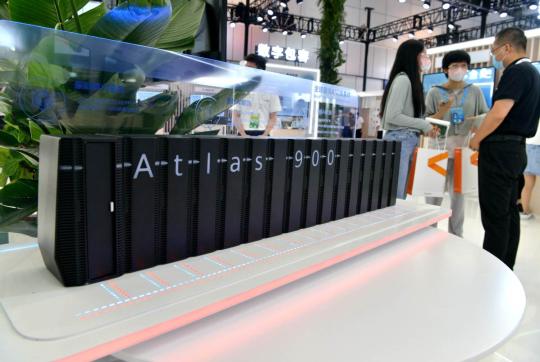 The booth of Huawei Technologies during an industry expo in Fuzhou, Fujian province. （Photo/China Daily）

China urged the United States to stop politicizing and weaponizing economic and trade issues, and treat companies from all countries operating in the U.S. fairly, the Ministry of Commerce said on Thursday.

The ministry made the remarks after the United States Federal Communications Commission, citing national security concerns, adopted new rules that will block both the import and sales of technology products from five Chinese companies.

The FCC said last week it had banned approvals of new equipment from telecom companies Huawei Technologies, ZTE and Hytera Communications, as well as surveillance equipment from Dahua Technology Co and Hangzhou Hikvision Digital Technology on grounds that they "are deemed to pose an unacceptable risk to national security".

The U.S. has repeatedly generalized the concept of national security and abused its state power to maliciously suppress Chinese companies. China is firmly opposed to these moves, said Shu Jueting, spokeswoman for the Ministry of Commerce.

The U.S. should immediately correct its mistake. What the U.S. has done not only harms the legitimate rights and interests of Chinese companies, but also affects the interests of U.S. companies and consumers. It undermines the international economic and trade order and rules, and is not conducive to the two countries or the whole world, Shu told a weekly news conference.

As the U.S.' discriminatory and distorted industrial subsidy provisions in its Inflation Reduction Act have disrupted global supply chains and violated the rules of the World Trade Organization, the Chinese side made a professional analysis of the alleged violations of WTO rules by the relevant provisions of the U.S. bill, Shu said.

The analysis found that the U.S. stance has seriously disrupted international trade and investment, and undermined the stability of global industrial and supply chains. This was highlighted at a WTO meeting held in Geneva from Nov 24 to 25.

"China expressed serious concern over the U.S. double standards and bullying on international trade rules," said Shu, adding China urges the U.S. to strictly fulfill its obligations under WTO rules and safeguard the authority and effectiveness of the multilateral trading system.

As economic globalization is facing adverse trends and global economic recovery is weak, the Ministry of Commerce stressed that China is ready to work with other members to implement the outcomes of the WTO's 12th Ministerial Conference, fully and deeply participate in the WTO reform negotiations, and oppose unilateralism and protectionism. China will also contribute to the stability of global industrial and supply chains, she said.

Though the U.S. policies and attitude toward China and trade are unstable and change frequently, U.S. companies have not stopped investing in China, said Bai Ming, deputy director of international market research at the Chinese Academy of International Trade and Economic Cooperation.

For instance, in late November, Cargill Inc, a Minnesota-based agricultural conglomerate, opened its second-largest grain and oil processing plant across the world in Cangzhou, Hebei province. ExxonMobil, a U.S. energy company, is building a petrochemical project to produce performance polymers used in packaging, automotive and other products in Huizhou, Guangdong province, with a total investment of $10 billion.

Dong Yifan, assistant research fellow at the Beijing-based China Institutes of Contemporary International Relations, said, "The U.S. companies' enthusiasm highlights that the opportunities of the Chinese market and the appeal of Chinese partners are unparalleled for large global companies."