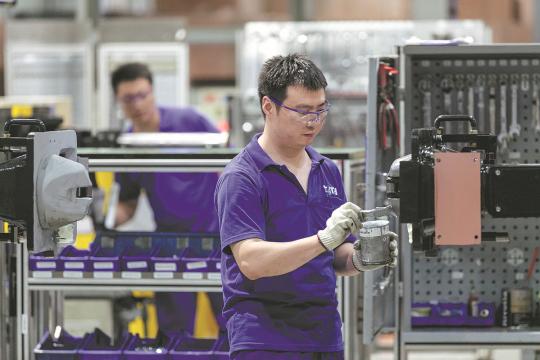 Apple topped the revenue ranking among foreign enterprises in Shanghai, according to the ranking.

A total of 253 foreign-funded companies appeared on the four lists. Apple Computer Trading (Shanghai) Co Ltd was rated first on the revenue list, Tech-Com (Shanghai) Computer Co Ltd topped foreign companies in imports and exports, Porsche (China) Motors Ltd contributed most on the tax list, while Protek (Shanghai) Ltd offered the most jobs, according to Huang Feng, chairman of the association, host of the event.

Companies on the lists contributed 34.75 percent of the total sales revenue generated by companies participating in the annual foreign investment report in the city, 47.3 percent of imports and exports, 34.67 percent of taxation and 18.54 percent of employment, said Huang.

By origin, up to 70 of the enterprises on the lists come from the US, followed by 33 from Japan and 30 from Germany.

"Shanghai will continue to promote investment, optimize the business environment and build the eastern cosmopolis into a prime choice for global investors," said Zhu Yi, deputy director of the Shanghai Municipal Commission of Commerce.

More than 60,000 foreign-invested enterprises in Shanghai contributed to a quarter of the city's GDP, two-thirds of its imports and exports, one-third in tax payments and one-fifth of employment, making Shanghai one of the world's most attractive destinations for foreign investment.

Despite the complex global environment, Shanghai has been constantly improving its business environment to ensure steady growth of foreign investment into the city, Zhu added.

Zhu described the China International Import Expo, which has been held for five years and has reported an accumulated $345 billion in intended transactions, as one of the most important platforms for foreign-funded enterprises entering the China market.

Another example is BASF, a major foreign investor in the country's chemical industry. It set up the first joint venture in China in Shanghai's Pudong New Area back in the 1980s.

Shanghai has become BASF's China headquarters thanks to the continued investment and business growth for over three decades, said Lou Jianfeng, chairman and president of BASF China.

BASF operates Innovation Campus Shanghai, a global and regional research and development hub in the city, the company said.

"BASF still has huge room for further growth in the country," Lou said.